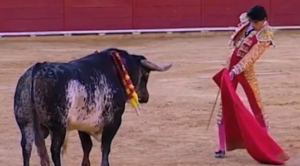 On live television, and in front of a cheering crowd, a Spanish matador was fatally wounded by a bull.  According to Saturday’s BBC News, 29-year-old Victor Barrio was knocked down and then gored in the chest by a bull named “Lorenzo.”

The incident happened on Saturday in the town of Teruel in Aragon – the grievously wounded professional bullfighter was rushed to a hospital, but he could not be saved. Matador deaths are rare – in fact, the last time that a bullfighter was killed was over three decades ago, reported the Chicago Tribune.

Barrio’s widow, 32-year-old Raquel Sanz, took to Twitter to express her grief – she Tweeted, “‘Thanks to everyone. I cannot reply to you, I have no words. My life has gone, I have no strength, although I have a lot of thanks,” reported the Daily Mail.

Barrio was not the only bull-related fatality on Saturday – hours outside of Teruel, a 28-year-old man was fatally gored at a bull run through a village.

Officials and fans are grieving Barrio’s death, but animal welfare advocates have been less sympathetic, noting the cruel manner in which bulls are slayed during the bloody battles.