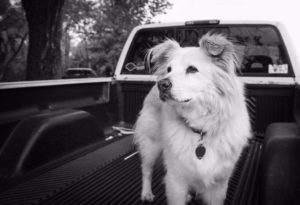 Jake had been battling cancer and had undergone chemotherapy, reported Taste of County. Unfortunately, unconditional love and excellent care only go so far, and as every pet lover knows, the end does eventually come, even if we aren’t ready for it.

Jake was a familiar face to Bentley’s fans – the dog was known to accompany Dierks on tour, was featured on an album cover and even appeared in a music video. On Bentley’s most recent album, “Black,” Jake is even referenced in the final verse of the song, “Can’t be replaced.”

Fans of Bentley, and his dog, are flooding Facebook with words of sympathy – the simple “rest in peace pal” post has been viewed 65,000 times, shared over 2,000 times and over 5,000 people have left words of comfort and understanding.