In Dillsburg, Pennsylvania, the puppy named Libre left for dead at a Lancaster puppy mill is still in critical condition, but continues to make small strides towards recovery as he amazes the staff at Dillsburg Veterinary Center. 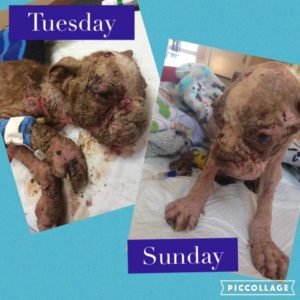 Although he remains on IV fluids for antibiotics and hydration, Sunday’s report describes Libre as a fighter, who for the first time tried to stand on his four legs. Libre receives medicated gauze baths daily for severe mange, has been eating well while his temperature remains normal. Staff and volunteers describe his attitude as cooperative and friendly.

“Still waiting on culture/sensitivity reports from the laboratory. Should have those reports by tonight or tomorrow morning. Even though he has been on multiple antibiotics since day one, this report will determine which antibiotics are sensitive or resistant to his bacteria which is pseudomonas. Prayers for a lot of antibiotic sensitivities so we can win over this nasty infection he has.”

Although Libre’s prognosis is still unknown, Dillsburg Veterinary Center continue to monitor him 24/7. Check out Libre’s little energy spurt as he actually eats on his own. He is fighting hard!

To help with Libre’s veterinary expenses, donations can be made to Dillsburg Veterinary Center, 8 Tristan Drive, Suite 1, Dillsburg PA 17019 or by credit card over the phone 717-432-7031. Toys/blankets for Libre can also be mailed to the above address. You can also donate directly to Speranza Animal Rescue
http://speranzarescue.org/donate or their Amazon Wish List
https://www.amazon.com/gp/aw/ls…