According to Miami-Dade County Animal Services, a neglected and heartbroken, 10-pound little Pekingese named Bo was scheduled to be picked up by a rescue organization. Sadly no one ever showed up. And now this eight-year-old pint sized senior, is in serious need of rescue. 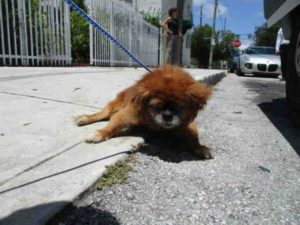 Bo is only eight-years-old; obviously a life long neglect pattern has caused many of his medical issues.  Facebook pages for this pup can be found here and here. When inquiring about Bo, make sure to reference A1798055.

Sunday evening might be Bo’s only chance to be rescued. Share his plight with approved rescue organizations, friends, family and social media contacts. Sharing saves lives. For additional information about Bo, contact: