You are here: Home1 / News2 / animal cruelty3 / Slow loris had teeth ripped out by captors so tourists could take self...
Spread the love

In a shocking case of animal abuse, a Bengal slow loris had all of his teeth pulled out so tourists could pose with the animal for selfies. 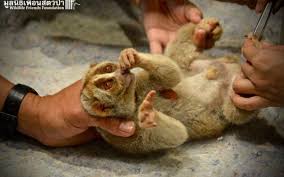 According to the Wildlife Friends Foundation Thailand, Boris Loris a male  loris (Nycticebus Bengalensis), arrived at the rescue center on  July 4th weekend from Koh Samui where he had been rescued by Phil of Samui Snake and Wildlife Rescue. Boris was “found” in the Chaweng Beach area of the island of Koh Samui; an area known for tourists having photos taken using wild animals as selfie props. As the slow loris is especially adorable – a primate almost appearing as a furry stuffed toy, they are highly sought after for “photo ops” thus propelling an  even stronger illegal market as they are often captured using painful, illegal snares.

Upon arrival, a veterinary examination revealed hideous  findings. Boris’ teeth had been pulled, he had  a broken wrist at one point, and he was covered in ticks.

“Teeth clipping and extraction is common with captive lorises, particularly those that are used illegally as photo prop animals to prevent them from causing injuries to the people that pay money to get that all so great selfie with a wild animal in a far away exotic place,” the rescuers wrote on Facebook. 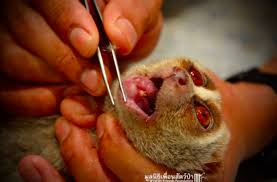 Lorises are the only venomous primates, and their toxic bite can cause severe injury and pain.

The tragedy  lies  with  the sad reality these  endangered animals are ripped away from their mothers in the wild, drugged and then doomed to spend endless days and nights being dragged from one tourist attraction to another for the sake of someone’s selfish profit.

The Bengal Slow Loris is listed as “Vulnerable” by the IUCN Red List of Threatened Species. Their population has declined more than 30% in the last three generations and is expected to continue to decrease because of hunting, the loss of their natural habitat through farming, timber removal, human  population, new roads, power lines and deliberately set fires. In addition they are hunted and traded for food, used as pets or killed as “medicine.”

Boris is finally safe; he will live out his  life at the sanctuary where he can  climb trees, receive a proper diet, socialize with his own species, and never be handled by a tourist ever again. 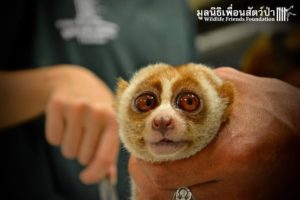 Please do not support this illegal activity. Report any sightings to officials. To read more about the work and how to help the Wildlife Friends Foundation, click here.