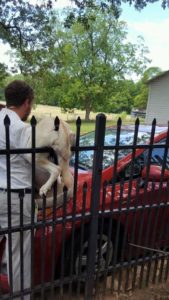 Fire officials were called by the dog’s owner after the not so agile pup tried to jump from a concrete bench over a six-foot fence where he became impaled by a pointed rod through his rear hip. 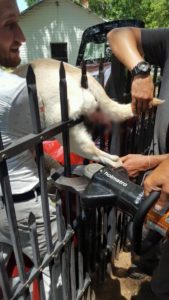 Fire rescue personnel pulled a car up to the fence, giving the dog a solid surface to stand on in order to take the pressure off the rear part of his punctured body. The crew used a battery operated tool to cut away a part of the fence, leaving the rod where he had been impaled as to not cause any further injury.

According to the Lincoln Herald, the rod had pierced through the dog’s hindquarters between his hip and tail.

“The dog stayed calm and didn’t whine or growl even once as Layne cut him free and we put him in the back of a car to go to the vet,” stated Asst. Chief David Brumbaugh. 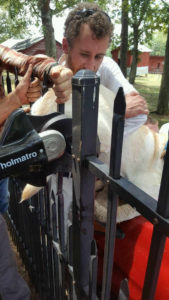 The dog was then rushed to a veterinary emergency clinic where he is reported to be doing well. His owner, Mary Ann Dixon is hopeful he will make a full recovery, and of course – never try that stunt again! Great job firemen – you are heroes as always!