The Internet has again fallen in love with photos of two hugging adorable stray puppies who had been rescued off the streets by kind-hearted Buddhist nuns, reports the Shanghaiist. 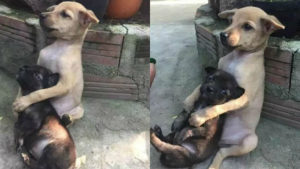 A series of photos of a small brown dog holding an even smaller black dog in his arms have gone viral. The dogs were found abandoned on the streets in Beijing, China. The little brown pup, seemingly protecting his tiny friend, touched the hearts of millions on Chinese social media, even though their stories are unknown. Online users of Weibo, (the Asian equivalent of Twitter) lashed out at the cruel owners who dumped the defenseless little pups:

“How can people be so cruel? They shouldn’t have bought the dogs in the first place if they weren’t able to take good care of them!”  Another user commented, “Oh, poor puppies! Look at their sad eyes, they must have been suffering a lot on the street!” 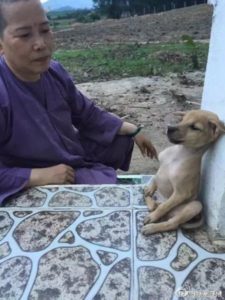 The monastery where the dogs are now being cared for has not been made public, but their pictures will forever draw smiles onto the faces of millions. 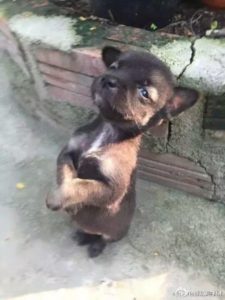 Who can ever forget the famous photo of two dogs from Georgia;  Kala and Keira hugging each other. Their picture appeared on the Facebook page of  Angels Among Us Rescue in July 2015, asking for help so the shelter dogs would not be euthanized. Their heartwarming hugs immediately went viral, and within two hours the dogs were rescued. Ah, the powers of social media. 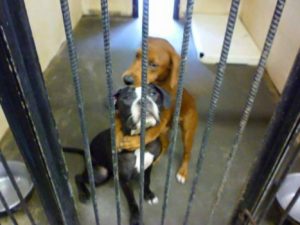 (Photo by Angels Among Us FB)