You are here: Home1 / News2 / Dogs3 / Death row dogs4 / Autistic child locks herself in bathroom with her dog as police label pet...
Spread the love
Tweet

In a heart wrenching scene, the Lancashire Police removed an autistic little girl’s dog from the family home on Norfolk Street, Lancaster last week, contending the pup is a pitbull-type dog which is banned in the country, reports the Mirror UK. 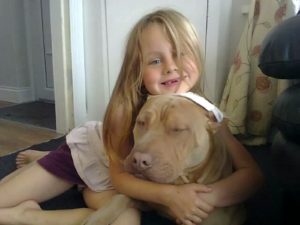 When local dog wardens reported Jenny Armer’s seven-year-old daughter’s best canine friend, Darla to authorities, eight police officers arrived with a warrant to remove the dog from the home. Armer claims the dog is a docile cross between a Shar-Pei and a Staffordshire Bull Terrier; neither of which are on the Dangerous Dogs List. The family adopted the sweet dog when she was just a puppy. Darla has played an important role with young Maddison, who suffers from autism and ADHD 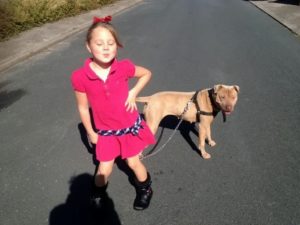 And it seems dog owners have little input once police have arbitrarily made their decisions.

“Police arrived with a warrant to take her because they suspected she was a pitbull. But she is a Shar-Pei crossed with a Staffie. My daughter Maddison locked herself in the bathroom with Darla to stop them taking her. They said she measures up to a pitbull-type, and they don’t need to assess her behavior. They told me I could sign a disclaimer to have her put to sleep or I could fight the decision in the court,” stated Jenny.

“I have to fight it because she is Maddison’s best friend; she helps keep her calm. If Maddison is having problems, Darla comes and gets me. We’ve started a petition, and it has been signed by the postman, the binman, the neighbors – she isn’t dangerous at all. I have to get her back for my daughter. She is distraught and isn’t sleeping properly.”

Jenny, a mother of five children, has been given the option to put Darla to sleep to kill her or go to court and fight. And fight is what she intends to do, despite the risk of being sentenced to prison; however she can only be prosecuted if she had previous knowledge her dog was a pit bull type when she adopted her.

Darla is being held at an undisclosed location and the family is prohibited from even visiting her.

To donate to help with funds towards the court case, click here.

Darla’s petition can be found here.