In an emergency plea for help, two purebred bonded German shepherds were in desperate need of rescue. In June, Betsey and Berta’s owner died, and no one in the family would care for the dogs; and so they ended up at the West Valley Shelter in Chatsworth, California. 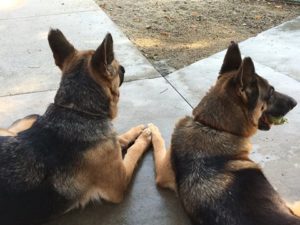 When volunteers at the shelter were told the dogs were scheduled to be euthanized just four days ago, advocates flooded social media for help. The plight of the “Barbie Twins” took on a life of their own as their story, their photos and video were shared thousands of times after a feature story by Pet Rescue Report.

And as angels so often appear just in time, came German Shepherd Rescue of Orange County. On  Monday, Betsey and Berta were overjoyed at their freedom walk. On the organization’s Facebook page, the following announcement brought smiles to everyone:

“UPDATE on ‘The Barbie Sisters’: Sprung from the shelter on Monday, the two girls (whom we believe to be mother and daughter) are overjoyed at their freedom! They have been making friends, playing ball and relaxing in comfort. This picture illustrates how bonded they truly are-they like to touch hands, just to make sure the other is nearby.”

“We are working to clear up some minor health issues, and learning more about their personalities.”

Please help to sponsor these two dogs. Donations can be sent here. Please mention “Barbie Sisters” in the notes.

Live long and wonderful lives Betsey and Berta. You are loved.