In Italy, a 6.2 magnitude earthquake completely destroyed historic towns and cities this week, reducing them to little more than concrete, sand and rubble. It wasn’t long before the 4.1 magnitude aftershock hit, accounting for the loss of 250 lives and more  than 360 injuries in the hardest hit small town of Amatrice.  According to CNN, a film crew witnessed a building collapse in front of them. 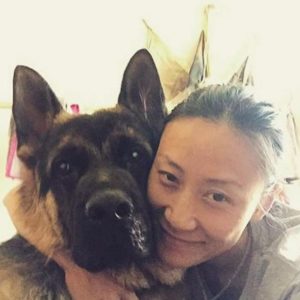 “People were just running onto the roads away from buildings in a panic. We saw our cameras shaking, and journalists here too were panicking,” said CNN producer Margot Haddad.

As with all tragedies, we try to find that flicker of hope which forever embeds the indomitable fight of the human spirit within all us, and when our four-legged companions show their incredible bravery and loyalty by our side, how can we fail to acknowledge their importance in our lives? And in a heartwarming story of one such relationship, Rudy the German shepherd demonstrated his incredible bond to the person he loved even more than himself.

According to Italian news, La Nozione, Anna, 24, and Rudy lived together in Amatrice. That evening Rudy began to act strangely and had been agitated the entire evening. Anna didn’t understand, but then she was awakened at 2:00 a.m. by Rudy as he ran around the house frantically barking.

“Rudy was nervous since the first hours of the evening, I did not understand, I thought he had seen someone, or some cat. Then about two in the morning began to bark like a madman through the house. I got there a little suspicious, Rudy has always been a dog so good .. “

Still not understanding why her dog had been acting out, Rudy wouldn’t stop barking and grabbed his mistress’ shirt and began to pull. Even though Anna resisted at first, she finally allowed Rudy to pull her out of the house.

“I didn’t understand why, but Rudy started to pull me by the jersey. He didn’t stop, even after I reproached him, so I decided to let him lead me away and then moments later, hell broke loose,” Anna told reporters.

Although few studies have been done as to how animals may be able to sense earthquakes, USGS  acknowledges animals with more acute senses are able to notice the smaller P wave that travels from the earthquake source and arrive before the larger S waves. In other words,  seismologists think animals sense the electrical signal generated by underground rock movements before an earthquake occurs.

Very shaken and speaking through tears, Anna told her story. She lost friends and family in the tragedy, but owes her life to her four-legged hero, Rudy. And by the grace of God they are two more survivors.