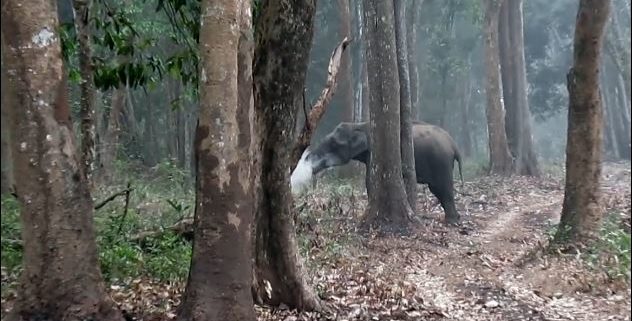 Scientists are baffled after catching a wild elephant on video “smoking” or at least blowing out plumes of smoke while eating smoldering charcoal lumps of wood. The female elephant was filmed in India at the Nagahrole National Park. The video was released on Friday, March 23 and was captured by Vinay Kumar of WCS India when he and colleagues had been studying tigers and their prey.

According to the Wildlife Conservation Society (WCS), the video shows the elephant picking up charcoal lumps with her trunk, eating the coal and then exhaling large clouds of smoke. Scientists think the elephant may have been eating the wood for medicinal purposes. Dr. Varun Goswami, a WCS elephant biologist stated:

“She appeared to be picking up pieces from the forest floor, blowing away the ash that came along with it, and consuming the rest.”

Dr. Goswami states charcoal may have toxin-binding properties of medicinal value to elephants as well as serving as a laxative.

The Nagahrole National Park is home to many threatened species including Asian elephants, Indian bison and tigers.

(Photos and video of smoking elephant via Facebook from WCS)

Young shepherd, with sad eyes, waits for someone to notice him
Scroll to top