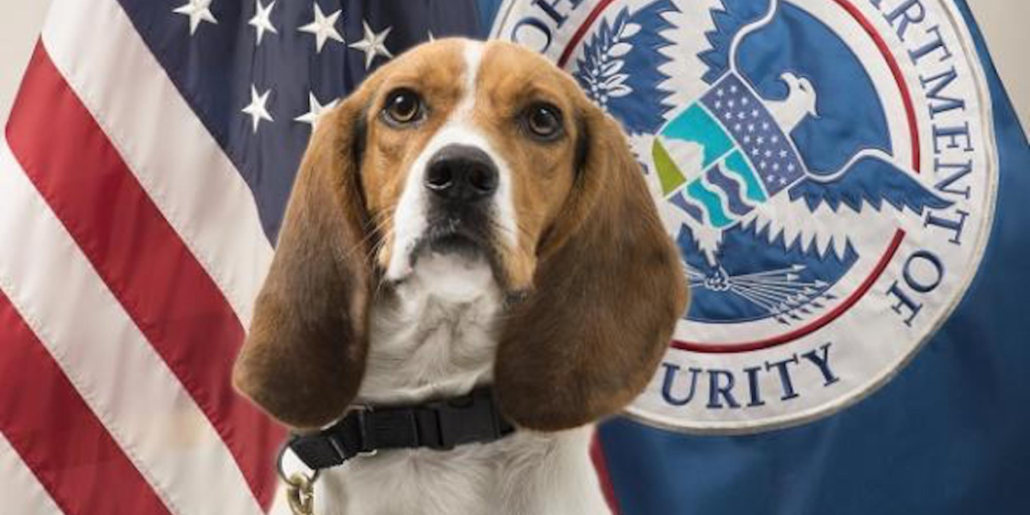 According to the press release from the US Customs organization, Hardy found the whole cooked pig’s head which weighed two pounds. A photo showed the dog admiring his discovery – perhaps thinking that would be quite the treat.

“Our best defense against destructive pests and animal diseases is to prevent the entry of prohibited agriculture products from entering the United States,” said Carey Davis, CBP Area Port Director for the Port of Atlanta. “This seizure at ATL illustrates the tremendous expertise of our four-legged K-9 partners in protecting the United States.”

People entering the United States are not permitted to bring pork or pork products into the country because of the fear of transmitting diseases like foot and mouth. The meat was seized and destroyed.

Hardy has been a K9 officer since 2015. The six-year old rescued Beagle completed training with U.S. Department of Agriculture at their National Detectors Dog Training Center in Newnan, GA.

“CBP Agriculture Specialists have extensive training and experience in the biological sciences and agricultural inspection. On a typical day nationally, they inspect over 1 million people as well as air and sea cargo imported to the United States and intercept 352 pests at U.S. ports of entry and 4,638 materials for quarantine: plant, meat, animal byproduct, and soil.

Learn more about CBP’s agriculture protection mission. and to find out more about CBP operations in the Southeast, visit @CBPSouthEast on Twitter.”

We do love our rescued dogs don’t we? You’re a good boy Hardy. Thank you for your service.

She gave up…then this!

Abandoned in the Everglades…