A four-month-old puppy, recently adopted by a Florida man, was stolen just before Christmas. According to the Miami Herald, Schiele, rescued from Puerto Rico and adopted last month from the Big Dog Ranch Rescue, was stolen on December 23 when someone broke the window of Rian Maercks’ parked Tesla.

Maercks had left the vehicle locked and running, with the air-conditioner on, while he ran into Aventura’s West Marine; Schiele had been sleeping and Maercks decided to let the pup rest while he ran a quick errand. Within minutes, someone broke the window out of his car and snatched the slumbering pup.

On Christmas Eve, the rescue group that Schiele was adopted from announced the offering of a $2,000 reward for the missing puppy:

🆘 $2,000 REWARD
Schiele is still missing. He had been out with his dad enjoying his day and preparing for Christmas. They made a final stop at West Marine in Aventura. Little did they know their last minute trip would turn into a nightmare. Schiele’s dad left him sleeping in the car (locked and ac running), only to return 5 minutes later to see a window smashed, with no sign of the puppy. Unfortunately, there were no cameras in the shopping center.

Adding a description of the missing puppy:

Schiele is a 4 months old, German Shepherd puppy. He is neutered, with a green tattoo on his stomach, around 25 lbs and wearing a black collar. He is also microchipped.

Anyone who has seen the stolen puppy is asked to email bringpuppyhome@gmail.com. 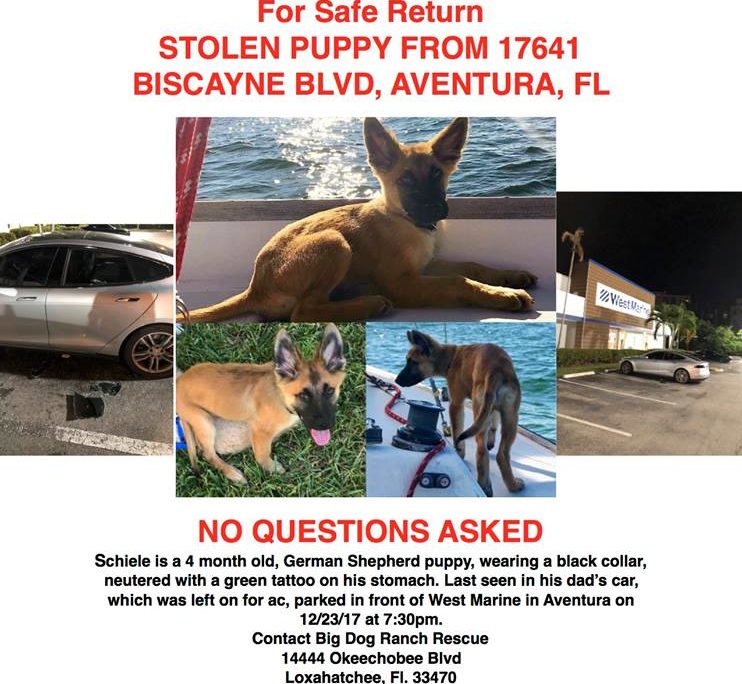