In Elizabethtown, North Carolina, Animal Control found a barely alive, little mass of tangles and filth in a ditch on the side of the road. 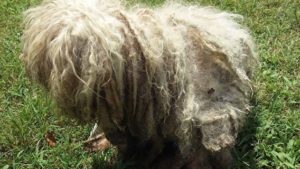 When they called A Shelter Friend for help on Saturday, even seasoned volunteers were horrified at the dog’s condition; initially no one could tell if the dog was a boy or girl. 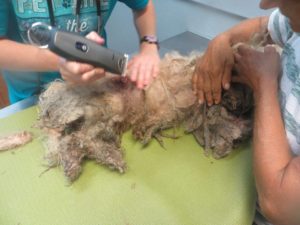 Dubbed Hero, because he had endured and survived the pain and suffering in a ditch where he had either been struck by a vehicle, thrown or crawled, the brave little guy cried softly as he waited to be rescued or die. Fortunately he was found and rushed to an emergency veterinarian. During Hero’s initial treatment, his tragic story began to unfold: 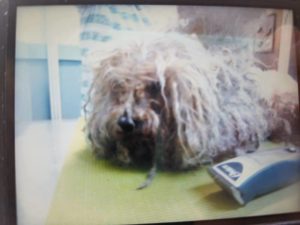 “The stench was gagging as they started to shave him, and the thought of what Hero had endured was almost too much for our minds to grasp. Hero had an open wound that is a tumor opened by the impact. He did not fight or struggle as the vet staff removed more than 2 pounds of filthy matted hair. It was certainly painful for Hero to endure. 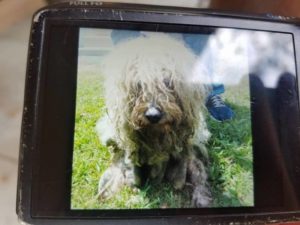 We were in tears at the thought of how long this poor little boy had been suffering in this condition – sitting in that ditch whimpering, waiting for either a merciful death or someone to help him,” wrote a volunteer on the organization’s Facebook page late Saturday night. 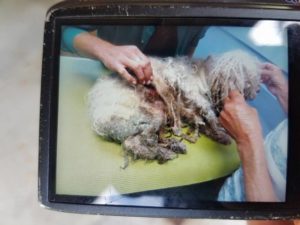 Hero is currently on intravenous fluids for both nourishment and pain control. He has  a dislocated hip, and his tumor will have to be addressed when he is stronger. 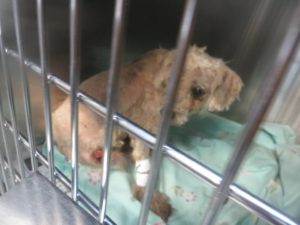 For now, it hoped Hero survives to see another day. Veterinarian costs are quickly mounting; please consider helping Hero by clicking here or calling the organization’s partner veterinarian on Monday at 910.739.9411.

Hero’s photos tell more of his story. Photos courtesy of A Shelter Friend.