A white German shepherd, who managed to slip away from his owner’s yard in Coney Island, New York, was found in a rather unlikely place. The dog, named “Chase,” disappeared during stormy weather on Thursday – 24 hours later, he was spotted in the water, a half mile from shore, swimming in Gravesend Bay.

NYPD Special Ops came to the rescue of the wayward dog – the Harbor unit went to work to save the dog, who was struggling in the water. Before it was known who Chase belonged to, the NYPD Special Ops posted photos of the rescued dog, along with, a request for help to determine who he belonged to, on Twitter, “This morning #Harbor #SCUBA pulled this dog from the waters of Gravesend Bay. If you recognize him, call @NYPD62Pct.” 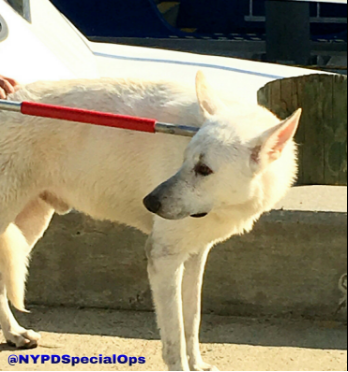 According to ABC 7  News, a wife of one of the officers ran across a Facebook post about a missing dog and put two and two together – in short order, Chase was reunited with the Vasquez family, who had been searching the area for their beloved pet. Owner Karen Vasquez told the NY Daily News, “I’m really happy he’s back home and we know he’s safe and not in danger. The whole family is really happy.”