Found whimpering and crying for help in a ditch along a country road in Elizabethtown, North Carolina last Saturday, the tiny mass of filth and tangles was barely discernible as a dog. Even seasoned volunteers at the local shelter were horrified at the dog’s condition. 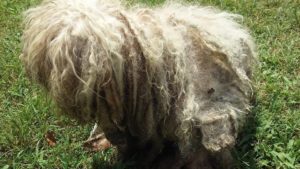 Dubbed Hero, because he had endured and survived the pain and suffering as he waited all alone in a spot where he had either been struck by a vehicle, thrown or crawled; the brave little guy cried softly as he waited to die. Luckily the 14-pound pooch was found just in time and transported to an emergency veterinarian hospital.

“The stench was gagging as they started to shave him, and the 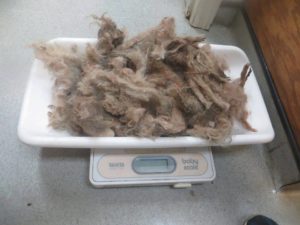 thought of what Hero had endured was almost too much for our minds to grasp,” described a volunteer from A Shelter Friend who accompanied the dog and stayed with him at the veterinarian’s office.  “Hero had an open wound that is a tumor opened by the impact. He did not fight or struggle as the vet staff removed more than 2 pounds of filthy matted hair,” posted the organization on their Facebook page.

On Saturday, Hero will begin his new life! Rescue Dogs Rock NYC were asked to help; surgery to repair Hero’s dislocated hip and remove the tumor will be scheduled -depending on the dog’s ability to travel. Surgery to repair the femoral head is estimated to cost $3,500.

“Poor neglected and abandoned Hero. What an absolutely heartbreaking story, dumped in a ditch and left to die barely recognizable as a dog; no clue if was male or female. Imagine the horror this little guy lived through? Breaks our hearts,” stated Jackie O’Sullivan, co-founder of Rescue Dogs Rock NYC when asked if their organization could take on the expense and responsibility of Hero. 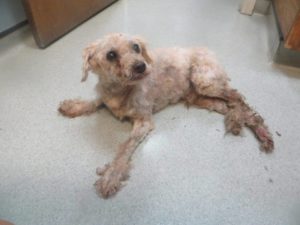 Funds are desperately needed to help. Donations can be made by clicking here or through paypal: donate@rescuedogsrocknyc.org.

Read the original story here. Get well soon Hero. Everyone is rooting for you!