You are here: Home1 / News2 / Dogs3 / dog news4 / Monkey kidnapped tiny puppy and kept it in the trees for three days 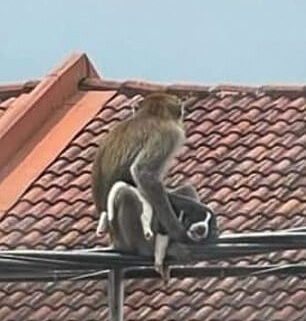 In Malaysia, a pet puppy was rescued on September 19, after he had been kidnapped by a monkey and held hostage up in a tree for three days. The two-week-old puppy. Saru, had been grabbed by the monkey who then quickly ran up a tree and to the top of an electricity pole in Tarman Lestari Putra.

According to the Daily Mail, a bystander told media reporters the macaque seemed to be treating the puppy as if he were a friend or its baby. It is believed the puppy had been snatched from a litter of stray dogs in the neighborhood.

A viral video shows the monkey moving through the trees and over roofs carrying the tiny black and white puppy, although there were reports he looked very tired. After all, what else do two-week-old puppies do besides nurse and sleep?

Of course, the concerned residents couldn’t allow the monkey to keep the puppy or do it harm, especially knowing the pup had not nursed in three days. The initial attempts to capture the puppy failed, and the puppy snatcher fled back up into the trees and across power lines.

The next and final plan for the pup’s rescue entailed throwing rocks and setting off small firecrackers for the noise to scare the macaque, which worked and caused him to drop Saru into the bushes where rescuers rushed to his aid.

At the end of the video, there’s a lot of cheering and the puppy is being cradled in a blanket. The first act was to feed the little canine after checking it for injuries. He has been reported to be doing well and has already been adopted by one of the local residents.

In Malaysia, encounters with macaques are very common and thousands of complaints against the monkeys are filed every year. Many of them have been fed by area residents and have become too dependent on humans for their sustenance. And we all know what happens when wild animals are befriended by humans – rarely works out for humans or animals.

Woman adopts 20-year-old cat because she didn’t want him to spend the...