You are here: Home1 / News2 / Wildlife Rescue3 / Wildlife officials killed fawn and young elk for being ‘too tame... 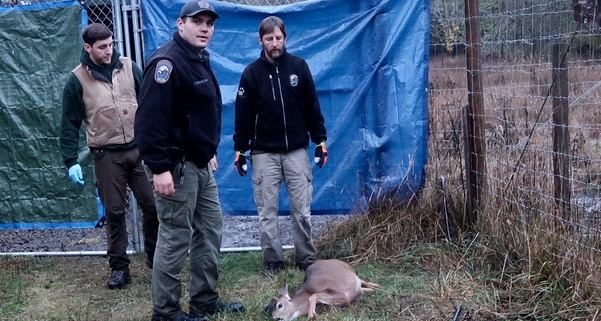 Young animals who were residing at a Washington state wildlife rehabilitation and rescue organization were seized and then killed by wildlife officials who determined that they were “too tame.” According to KOMO News, a young elk and three deer fawns were taken from the For Heaven’s Sake Animal Rescue and Rehabilitation center in Thurston County last week.

Officers with the Department of Fish and Wildlife claim that the animals seized from the organization were too tame and needed to be put down.  Eric Gardner, head of the state Wildlife Program, stated:

“This is a tough situation for everyone involved. The department licenses wildlife rehabilitators to prepare sick, injured and orphaned animals for release back into the wild, but those animals have virtually no chance of surviving if they become habituated to humans.”

Wildlife managers are told to put down “habituated animals,” rather than to release them into the wild, because of state laws and regulations. Gardner cited the fawns’ behavior as evidence that the animals were “habituated” to people:

“As soon as the two staff members entered the enclosure the fawns came right up to them and started nuzzling them for food.”

The rescue and rehabilitation organization commented on the heartbreaking situation on Monday, telling its Facebook followers:

These photos were taken on Thursday when Fish & Wildlife showed up unannounced to try to get all the fawn and the elk. The elk was lured with an apple and one little fawn approached. The others could not be caught because they wouldn’t allow anyone to get near them and they ran. The accusation is that they are too habituated. They had only been weaned from taking bottles for two weeks.

The organization commented specifically on the young elk which was seized and killed by wildlife officials:

The elk was still, technically, a baby. When the people brought her here, she was friendly before we got her (people had been petting her and stuff) so it became our job to make her wild again so, naturally it takes longer if people have already made the process more difficult. She would have been fine and we would have introduced her into an elk herd. We already had a herd picked out for her.

Followers of the rehabilitation organization are outraged over what happened – and disgusted by the actions of the state wildlife officials. Especially because the fate of the remaining fawn has not yet been determined…wildlife officials may put them down as well.

Have something to say about this situation? Voice your concerns to: Jim Unsworth, director of Dept. of Fish & Wildlife, at: director@dfw.wa.gov