There has been some confusion over the fate of a coyote which was removed by a trapper from the Dat Dog restaurant in New Orleans, Louisiana, last week. Though multiple news outlets reported that the coyote was humanely euthanized shortly after being captured, some people are under the mistaken impression that the animal was later spared.

In order to eliminate any confusion, the Pet Rescue Report reached out directly to the Louisiana Department of Wildlife and Fisheries on Thursday morning. The official response from Melissa Collins, the agency’s permits coordinator, which confirms that the trapper euthanized the coyote, follows:

The Louisiana Department of Wildlife and Fisheries is tasked with the management and regulation of all wildlife species in Louisiana and promulgates rules and regulations that allow for the take of wildlife species. It is my understanding an LDWF permitted Nuisance Wildlife Control Operator (NWCO) retrieved the coyote found at Dat Dog restaurant.  NWCOs are required to abide by the NWCO program rules and regulations.  According to §127.F.p. of the NWCO regulations:
Raccoons, skunks, feral hogs, coyotes and nutria shall not be relocated and shall be euthanized, within 12 hours of capture, in accordance with the current American Veterinary Medical Association guidelines on euthanasia.
If an NWCO were to transfer a live coyote to a wildlife rehabilitator, an NWCO would be in violation of the NWCO rules and regulations, which could result in a possible citation and loss of license. However in this case, the trapper removed the coyote and humanely euthanized the animal according to AVMA guidelines as required by NWCO rules and regulations.
Coyotes are rabies-vectors species and potentially carry other wildlife diseases/parasites (e.g., distemper, parvo virus, echinococcus) that can impact both human health and the health of domestic animals and wildlife populations. Compliance with laws, as well as knowledge on the proper handling and disposal of wildlife species is important in preventing disease outbreaks among the public, domestic animals, and wildlife populations. 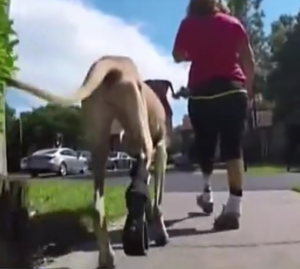 Dog and woman have something in common – read about their special bond here.

Rat tied up with string and shamed for ‘stealing’ pieces of ric...
Scroll to top