A Houston based animal rescue group found Jude, a pet pig, on the side of a busy road with severe injuries after he had been used as “dog bait” for training dogs to fight in the ring. According to Houston Mini Pig Rescue & Network, the pig was immediately transferred to the Texas A&M Large Animal Hospital in College Station, where veterinarians first suggestion was to humanely euthanize Jude because of the extent of his injuries. 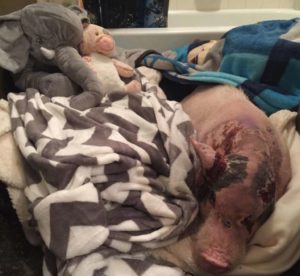 Rescuers didn’t agree, and made the decision to help Jude fight for his life. After one night at the hospital, he was released, however his injuries would require constant care:

“He had one eye completely gone that was filled with puss and maggots, the ear that remained was so inflamed with infection that we didn’t think it could be saved,” stated Meagan Se, a spokesperson for the group according to the Chron Houston. “Both of his hind legs had bloody impressions from a rope being tied to them tightly as well as a bloody rope burn around his neck.”

And then there were more egregious injuries that Jude had suffered including his tusks chopped off to avoid hurting the dogs as well as his front teeth broken and jagged for the same reason.

“This is the result of a defenseless pig being tied up and having dogs turned on to him as practice for dog fighting. Not one animal, pig or dog, deserves this abuse for the ‘entertainment’ of sick humans,” rescuers posted on their Facebook page. 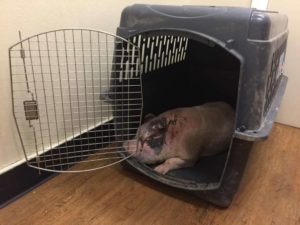 The group could barely imagine the pain and suffering Jude had suffered, but when they needed to rub the antimicrobial medication to his tortured body, Jude allowed his rescuers to touch him and seemed to enjoy the first moments of tenderness he had felt in such a long time. Jude’s recovery has been remarkable both physically and emotionally.

According to the Humane Society, hog-dog fighting is a sport still quite prevalent in the South. The “sport” is disturbing as the dog owner leads his trained fighting pit bull into an enclosed area seemingly angry and ready to fight. At the other end of the arena a pig is forced into the pen while the ‘handler’ pokes and pushes the animal into the pen to face the already snarling dog. There are no defenses for the pig as someone has already chopped off his tusks and teeth. In a moment, the dog attacks and the pig squeals in fright and intense pain. The crowd cheers as the dog wrestles the pig to the ground  – the dog is declared the winner. And then the pig is removed and waits for the next fight.

Fortunately Jude will never experience any kind of abuse, torture or pain again, and the group is hoping to use this experience and heart wrenching example of animal cruelty to convince lawmakers that more legal protections are needed for pigs in the state.

To donate to Jude’s care, please use  the PayPal link:
PayPal.me/houstonminipig 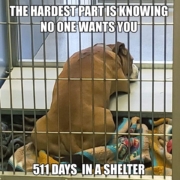 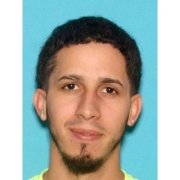 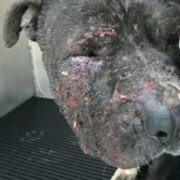 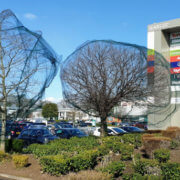 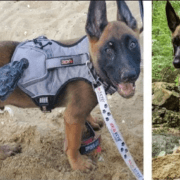 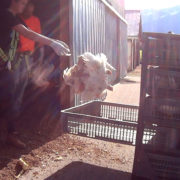