On Monday, the last orca to have been born at SeaWorld died after just three months of life, the press release announced via SeaWorld Parks and Entertainment. The calf, named Kyara, died from “very serious and progressive health issues over the last week” at the park located in San Antonio, Texas.

“A full post-mortem examination is being conducted, which may take several weeks to be completed. Our team was treating her for a serious case of pneumonia, which was the start of her declining health… This weekend Kyara, the 3-month-old killer whale calf at SeaWorld San Antonio, was being treated at the park’s Animal Hospital for an infection. The dedicated team of veterinarians and care staff spent the last three days providing critical care for Kyara, but despite their best efforts, her health continued to decline and she passed away earlier today.” 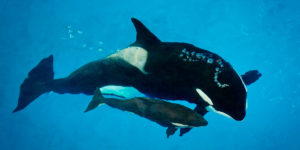 In a prepared statement, orca trainer Julie Sigman stressed Kyara had made a tremendous impact on staff as well as guests who had visited SeaWorld to see her. In April, when Takara, the baby’s mother gave birth, SeaWorld called it “an exciting and emotional day.” In March, however, amidst a significant backlash of criticism from animal activists group throughout the nation, the breeding program was ended.

In the 2103 documentary Blackfish, which exposed the cruel treatment of the orcas and the physical, mental and emotional impact on the animals, visitors stopped visiting the park with the decline in attendance and the adverse publicity seriously affecting the company’s stock.

Although there still remain 22 orcas in the San Antonio and Orlando parks, and the whales are still taught to perform in their concrete prisons, the theatrics are coming to an end in San Diego and San Antonio. Sadly Kyara never did get the chance to swim in the ocean as any whale should be entitled, PETA lamented on Twitter  Monday morning.

Rest in peace Kyara. We are sorry you were never free. 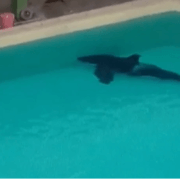 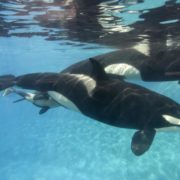 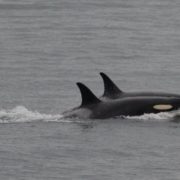 Investigators in tears as victims of dog cruelty case rescued in horror hou...
Scroll to top