On Tuesday President Trump used his presidential pardoning power to spare two very lucky turkeys from becoming dinner on Thursday. On a beautiful fall afternoon in the Rose Garden, Trump began his speech with the history of turkey pardoning citing President Harry Truman as the first to ever do so, however turkey experts say it was President George H. W. Bush in 1989 who actually pardoned the birds. 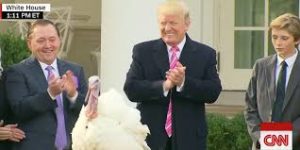 So who are the lucky fowls? First there is Drumstick, who weighs in at 47 pounds. His pal Wishbone is 36 pounds, and the two will join Tater and Tot, the two turkeys pardoned by President Barack Obama last year. Trump did make a joke about overturning executive actions stating:

“As many of you know, I have been very active in overturning executive actions of my predecessor, but I have been told that Tater and Tot’s pardons cannot be revoked, so we’re not going to revoke. Tater and Tot, you can rest easy. Drumstick you are hereby pardoned.”

Trump explained Drumstick and “his friend Wishbone” would join Tater and Tot and had bright futures ahead of them. Both turkeys will be the guests at Virginia Tech’s “Gobbler’s Rest” enclosure, where last year’s pardoned turkeys — Tater and Tot — currently reside. Sadly these turkeys, which are bred exclusively to be eaten, do not have long life spans.

And as with so much else with this presidency came the Twitter influence. It was a contest between Drumstick and Wishbone:

Which turkey should be pardoned during the National Thanksgiving Turkey Pardoning Ceremony?

After the pardoning, Drumstick and Wishbone will join last year’s turkeys, Tater and Tot, at Virginia Tech’s “Gobblers Rest” exhibit.

Meanwhile the pair stayed at the Williard Continental International Hotel and gobbled appropriately for the press. The hotel stay is paid for by the National Turkey Federation, which supplies two turkeys each year for the presidential pardoning ceremony at the White House. Check them out:

Posted by InterContinental The Willard Washington D.C. on Monday, November 20, 2017

After 15 years, Zeke’s family decided to move without him

Owners walked out of shelter while terrified poodles going through intake p...
Scroll to top