A former enforcer of one of the most infamous Mafia families in the country has turned in his penchant for crime in exchange for caring for Brooklyn’s abused and neglected animals. Meet James Giuliani,  the “Dogfather,”who previously worked for the Gambino crime family (Gotti faction); they parted ways a long time ago. 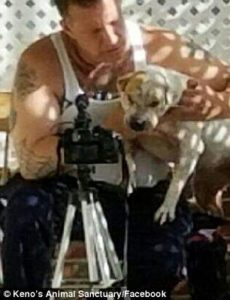 According to the Daily News, “Dogfella,” as Giuliani is also affectionately called, has returned to the Bensonhurst district he used to call home, and instead of hijacking vehicles, robbing homes, businesses and kidnapping, dedicates his life to searching and saving animals in need of rescue. He’s not all legal however – by taking in wildlife at his operation, he’s violating city regulations.

“The Health Department regulates shelters to ensure animal safety,” a spokesperson for the department stated. “We will look into this.”

The current population at Keno’s Animal Sanctuary is 52 animals which includes dogs, cats, lizards, tortoises, birds, squirrels and whatever other animals are needing help. As a former drug user and teenage heavy drinker, Giuliani believes rescuing animals are his real calling in life, and with his partner Lena and a host of volunteers, care for wildlife that are kept in the basement while the dogs wander free upstairs; it’s a no-cage facility. And though he never denies he has done a few stints in prison for past crimes, it wasn’t until he realized helping the animals, which grew up like him without a chance, is the reason why he does this now: 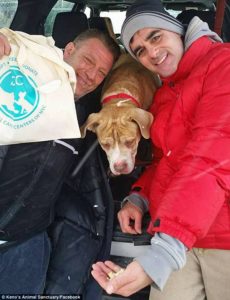 “But now I have an addictive personality toward my passion. You gotta find something in your life. You gotta love it. If I don’t love do this, nobody will,” stated Giuliani as posted in the Daily Mail. “I rescue, no joke, 60 to 100 raccoons a year, About 30 to 60 possums.”

And for the workaholic who hasn’t taken a day off in 1,160 days and sleeps just three hours a night, his shelter boasts a 94% re homing and return to nature rate for the animals he takes into his facility. In addition, Giuliani also owns a grooming salon and pet store that help to pay the bills.

(Photos of Dogfather and related animal photos via Facebook)

Check out the short video, and just when you think no one cares, they really do!

Giving quality time to Gabby life time resident. Gabby came to Kenos extremely aggressive but with my guidance and love she has come a long way. She is what Kenos was built for.. Saving all God's creatures