An animal welfare agency in Ohio has launched an investigation after viewing video and images of a carriage horse who collapsed on Saturday night. The disturbing situation was captured in images by a woman who posted her narrative of the situation on social media.

Last night a horse from Shamrock Carriage Company (whom deleted their social media after this post) ran by Peter Legehan and Jimmy in downtown Cleveland was forced to go down a very steep slippery brick hill with heavy traffic and collapsed slid and hit a car.

Grabski said that the horse was “clearly terrified” and kept peeing – she noted that he was too exhausted to get up on his own. 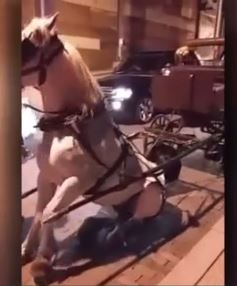 Despite the horse’s obvious distress, the driver allegedly forced the animal to continue on. Only after Grabski made a scene did the man relent. She wrote:

After my friend and I insisted he only cared about himself and continuing on and that he needed to get him off the road he finally listened. The horse had been injured sliding and should not have been forced to keep going so he can make a dollar. He only called for help because we made a scene. Not because he cared. Myself and a couple others pulled the carriage off of him and made the driver unhook him and called someone to get him on a trailer and out of there.

She recounted what happened next:

He wouldn’t completely unlatch him and the horse spooked and ran in the street to get away not knowing he was still attached and dragged my friend across the road by his foot that got caught and slammed him into a cement pillar, ran into the steep street and collapsed on his side. It took several bystanders to help get the horse up so he didn’t get hit. We had to put car mats under his hooves to get an actual drip on the floor, because it was that slippery. The driver couldn’t even handle his own horse in a situation like that.

And she voiced her opinion over what many people agree is a cruel industry:

It wouldn’t happen if we didn’t allow companies like this! Someone needs to investigate this company and get it shut down. Learn what roads and routes are IMPOSSIBLE for your over worked horse to travel. Learn when your horse needs a break to eat, drink and rest. Understand the busy streets of Cleveland on a Saturday night is not the place for a horse. Stop using horses for your little “fairytale” ride through Cleveland and just to take pictures and say you road a carriage.

According to News 5 Cleveland, The Cleveland Animal Protective League is investigating. Watch the news clip showing video of the situation here.