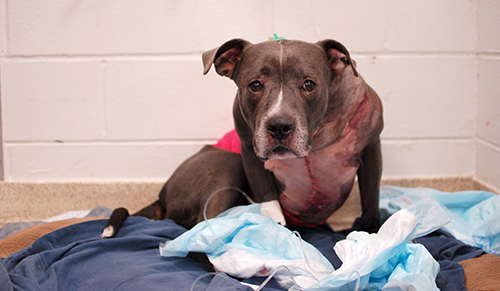 A pit bull named “Blue,” is being hailed a hero after taking a bullet to protect his owner from a dangerous armed intruder. According to a press release from Penn Vet, the frightening incident took place one morning in February at the home of Nina Teller and Leroy Buchanan.

According to the release, Buchanan was in the kitchen preparing breakfast when the invasion took place – Buchanan stated, “I told Blue to get after the guy. He locked onto the guy’s leg and that’s when he fired his gun.” The men who broke into the house and fired the gun fled the scene, but Blue had been hit and he was seriously injured.

Teller stated, “It was pretty scary and I was shaken up. But I was worried about Blue. He was bleeding a lot. We were scared for him.” When the police arrived, Teller stayed to give her statement while Blue and Buchanan were rushed to Penn Vet in a patrol vehicle.

Blue initially appeared to be stable when he arrived, but shortly thereafter, his condition deteriorated. Penn Vet described the frightening situation for the injured canine hero:

His condition rapidly declined, so we started tapping his right side. Suddenly he decompensated from a respiratory standpoint and turned very gray. We weren’t getting negative pressure, and the air just kept coming through his chest.

Blue did not improve, so clinicians intubated him and continued tapping his chest. Though Blue’s wounds were on his left side, there was a continuous leak to his right side through the mediastinum, which connects both sides of the chest.

In order to remove air from his chest and allow the lungs to expand more normally, a chest tube was placed and Blue was connected to continuous.

Blue had to undergo emergency surgery and a portion of his lung was removed – thankfully, with close monitoring after surgery while in the intensive care unit, Blue made a remarkable recovery. Just four days after being shot and undergoing major surgery, Blue was able to go home with his relieved owners. 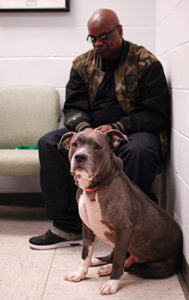 These funds allow pet owners who have taken good care of their pets, and have fallen on hard times, the opportunity to get some financial help. This is a wonderful program for responsible pet owners as well as a huge morale booster for the staff.”

Powell noted how this fund was particularly meaningful in Blue’s situation:

Blue was shot trying to protect his family during a home invasion. Our Charitable Care program allowed this ‘hero dog’ to return to a family that loves him dearly and is forever grateful for his protection.

DNA results are back for family’s seized German shepherd – read the story here. 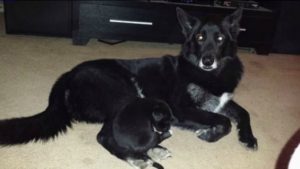