A family’s dog has been blamed in the accidental strangulation death of a child in Pennsylvania. According to Monday’s Fox 29 News, the five-year-old boy, identified as John Bruno, of Warrington, died on Saturday.

Bruno was discovered last week lying face down in the snow – he had a scarf around his neck and the family dog, a young hound mix, was tugging on it. The boy was unconscious when he was found by his mother, and although he was rushed to a hospital for treatment, his injuries from ligature strangulation ultimately proved to be fatal.

On a GoFundMe account which was set up to help the family with expenses, the boy was described as, “a vibrant 5 year old boy. His smile and boundless energy was electric. He loved Ninja Turtles, Pokemon, Superheroes and being silly. Above all else John loved his mom, dad, and big sister.”

Investigators have determined that the sad situation is the result of a tragic accident. 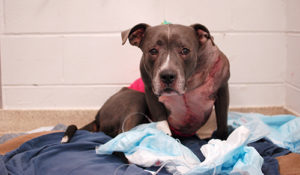