You are here: Home1 / News2 / Dogs3 / dog abuse4 / Puppy Libre case under investigation by state police and DA’s of...
Spread the love
Tweet

When the Lancaster Society for the Prevention of Cruelty to Animals refused to press animal cruelty charges against a puppy mill breeder in the case of a four-month-old Boston terrier named Libre, animal advocates never gave up. On Wednesday, the  Lancaster County district attorney’s office and state police launched an investigation, reports PennLive. 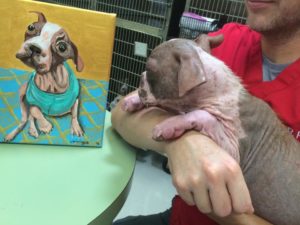 Susan Martin, executive director of the Lancaster County SPCA and an animal cruelty officer for the county, decided not to press charges against the breeder stating there was insufficient evidence of abuse or neglect. Advocates were outraged and called for Martin’s resignation.

According to Brett Hambright, a spokesman for the district attorney, both agencies are investigating whether there will be charges lodged against the unnamed breeder; no timeline as to the conclusion of the investigation has been announced.

When rescued on July 4th by Janine Guido, owner of Speranza Animal Rescue in Quarryville, the puppy was rushed to Dillsburg Veterinary Hospital emaciated, dehydrated and barely alive. Suffering from mange and sepsis, Libre’s struggle to recover has gone national as the adorable little pup slowly gains back his health and strength. According to Dillsburg Veterinary Center owner Dr. Ivan Pryor, Libre is scheduled to go home with new mom, Janine Guido within a week or two.

Emotionally moved by the plight of the puppy, Senator Richard Alloway (R-Franklin County) announced on Monday he will begin working on legislation called “Libre’s Law” and will work with the Humane Society of the United States to bring more awareness to the problem of animal cruelty as well as stiffer penalties to offenders.

You can help the writers of Pet Rescue Report continue their work by donating here.