In case, the name of Lancaster, Pennsylvania sounds familiar, it’s because of a little Boston terrier named Libre who captured the hearts of animal lovers nation wide after he was discovered near death at a puppy mill and rescued by  Speranza Animal Rescue.

And now in the borough of Elizabethtown, two dogs were discovered on Tuesday 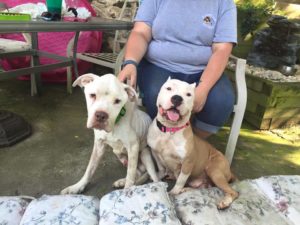 “The neighbors had found two dogs in really bad shape. They were on the side of the road near a farm field,” stated Mandi.  “He (the man who found the dogs) wasn’t sure if Captain was alive at first.”

The dogs hopped right into the Good Samaritan’s  car and were brought to the  Pitties.Love.Peace rescue. Laurie Yost, president of the organization describes the condition of the dogs. Captain, the male is estimated to be six-years-old and weighs 33 pounds – half of what he should weigh for a dog of his breed and bone structure. 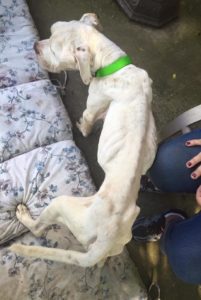 He has no lower teeth and is urinating blood. His rib cage and spine show through his white coat. As to Morgan, the female, she appears to have been repeatedly bred. Both dogs were covered in fleas.

“Our theory would be that someone dumped them. Whoever the previous owner was took them out and dumped them in the middle of farmland and left them there. He didn’t want to be responsible for the dogs anymore or to be accountable for what he was doing, with the neglect they were suffering.” stated Laurie. 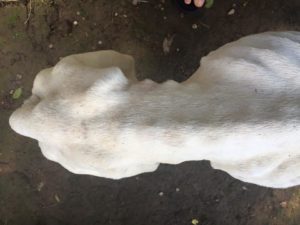 The dogs are currently under veterinary care and it is hoped someone qualified will offer to foster the dogs until they are ready for adoption. An investigation has been launched by the Lancaster SPCA. 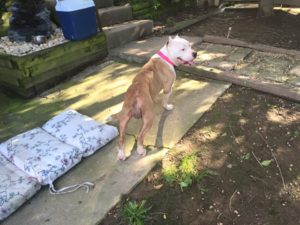 Emaciated Pit Bull Captain sitting nicely for treats. Captain and Morgan abandoned on a road in Lancaster County. Their full story will be on tonight at 6 on @abc27news. #pitbull #dog

“If you have any information on the former owner of Captain and Morgan, please send us a private message. Their case is being investigated. It’s time to take a stand and let everyone know that animal abuse and neglect will not be tolerated,” Laurie posted to the rescue’s Facebook followers.