It’s been a long time coming for animal advocates who never lost faith in the judicial system when it came to filing animal cruelty charges for a tiny Boston terrier puppy named Libre” who suffered from severe physical distress due to that lack of care,” in Lancaster, Pennsylvania. 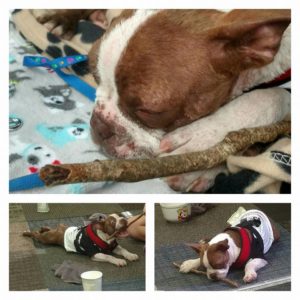 Thursday afternoon, District Attorney Craig Stedman announced cruelty charges have been filed against Benjamin Stoltzfus, 33, of Quarryville, reported WgalNews. Stoltzfus faces charges of failing to provide adequate veterinary care as well as leaving the puppy in a kennel cage where he would have died. According to investigators, Stoltfus has allegedly admitted to failing to care for Libre.

As to changing policies regarding animal cruelty investigations, Stedman also announced police and detectives will be in charge of animal cruelty enforcement and prosecution.  A petition to suspend Lancaster County SPCA Director Susan Martin as the police humane society officer for the Lancaster County has been filed; alleging Martin enforced cruelty laws in a “substandard” fashion. Martin refused to charge Stedman stating there was insufficient proof he had knowingly neglected Libre.

After the puppy was found near death on July 4, Libre was transferred to the Dillsburg Veterinary Clinic where he required 24/7 constant care to regain his health. Now at five-months-old and well on his way to a complete recovery, the over the top adorable puppy, who has captured the hearts of animal lovers everywhere, resides with the founder of Speranza Animal Rescue who has adopted him.

At the press conference, Stedman also advocated for stronger laws and punishments for those convicted of animal cruelty.

Follow the National Pet Rescue on Facebook. No part of this article can be copied or rewritten in part or full without the express permission of Pet Rescue Report. (Photo courtesy of Speranza Animal Rescue.)