In her second Puma campaign, 18-year-old model Kylie Jenner posed with a pay phone and two dogs in a pretend hip hop style – taking the scene back to the ’80s as she continues to promote the brand’s classic suede sneakers. And as new photos rolled out in the reality star’s campaign, came the disturbing photo of Jenner holding two pit bulls tethered with heavy chains perpetuating the negative “street” stereotype of the breed. 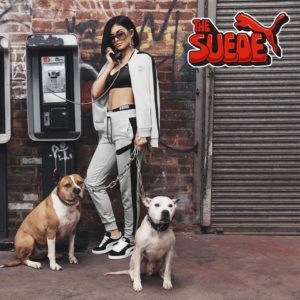 A firestorm of negative comments have followed on the company’s Facebook page:

Kelly Reeves: “Way to go PUMA with perpetuating a stereotype. With pit bulls being the most maligned and euthanized breed of dogs in the US, this is how you chose to use them in your advertising? Never will I support your brand. That coupled with a gross attempt in trying to make Kylie Jenner look gangsta, she’s a rich, spoiled brat and looks like a fool.”

Ironically in the ’80s is when the perception of the breed began to change, but it wasn’t the breed that caused the uproar; it was the drug dealers, gang members and other criminals who trained the pit bulls as guard dogs. And  then the horrid stories picked up a tragic life of their own as these same same miscreants trained the dogs to fight, and rather than concentrating on the men who made these dogs aggressive, the entire breed came under attack.

There was a time when no one ever heard of pit bull attacks. Those were the days when the breed was an American favorite and found in World War I recruitment ads, hero dogs that served proudly in the military and the friendly dogs popularly known as a child’s best friend. Who can forget the dogs of  Our Gang comedies and the corporate pit bull mascot for Buster Brown shoes?

Today, the perception of pit bulls has gradually started to change and communities are finally realizing that no breed is inherently bad. Although the term “pit bull” does not designate a breed, it more or less categorizes any dog with a blocky head weighing between 30 and 100 breeds as one of at least 30 individual breeds. Too often the uneducated “guess” at identifying the breed based on coat, color, body size, ears and head shape. As to “dog bite” statistics, how many media reports inaccurately identify dogs as pit bulls just to attract readers – ‘click bait’? Whenever a pit bull type dog is involved in a biting incident, the website always becomes flooded with comments from both sides – why pit bulls are bad and conversely why pit bulls are good.

The raw news is society will never live without the risk of a dog biting a woman, man or child much as we will never live in a world devoid of all crime and accidents. We should however, stop blaming a “breed” of dogs and stop depicting these dogs as bullies – as in the above photo of the dogs looking miserable as they were forced to pose with Jenner.

Lori Snodgrass Mitchell: “Disgraceful. Take off the chains and use your advertising for something good like adoption, banning bsl, spay/neuter programs, etc. Not putting pits in a bad light. Many of us work endlessly to stop this and you just ruined it all in one ad. And Kylie, what happened to being a rescue supporter? Not this way you aren’t. Stand up for these dogs.

Each year, 1.2 million dogs are euthanized in shelters across the country; approximately 40% of the dogs killed are pit bulls which means more than a half a million pit bull types die alone in shelters. Just in Los Angeles, statistics bear out that 200 are killed every single day. Are you listening Puma?

Bonded German shepherds homeless and scheduled to be euth’ed after owner’s... Man who videoed himself raping dogs – stripped and beaten by animal a...
Scroll to top