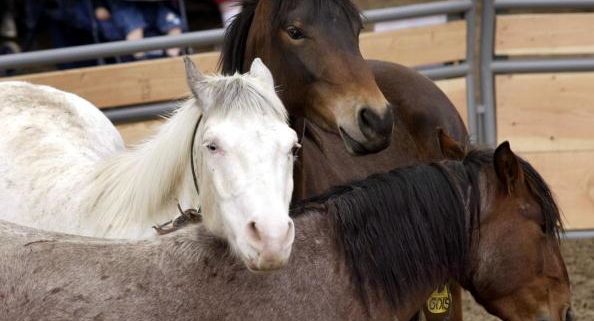 After an enormous outrage from Americans across the nation, following an announcement on Friday that an advisory panel proposed to kill 45,000 wild horses and burros, the United States government quickly did an about face on Wednesday, and according to Reuters‘ update, stated they have no plans to euthanize the animals.

The U.S. Bureau of Land Management contend they are having a tough time trying to find people to adopt the number of horses and burros and complain about the expense maintaining corrals and pastures. And then on September 9, the National Wild Horse and Burro Advisory Board recommended that those not adopted be euthanized or sold for slaughter.   The agency stated it has not yet formally replied to the advisory board’s proposal, and will do so at its next meeting, which is set to take place in the next few months.

Tom Corey, a spokesperson for the bureau sent the following email after an enormous uproar:

“…continue its current policy of caring for unadopted or unsold wild horses and burros… and will not sell of send any animals to slaughter.”

Americans were quick to criticize the advisory board manager for his suggestion to kill or send  the horses to slaughter. Sadly, it is estimated that 45,000 horses and burros are being held in captivity, and the American public wholeheartedly agrees, it is therefore the bureau’s job to care for them, since they are the ones who decided to capture the wild horses to provide more room for grazing cattle. Most of the  free animals roam in Nevada and California.

Gillian Lyons, manager for the wild horse and burro program for the Humane Society of the United States noted how quickly Americans responded to the idea of killing the horses.

“It’s something the American public just doesn’t know about; you don’t think of wild horses being held in facilities all across the United States,” Lyons stated.

The HSUS says the bureau spends too much money paying private contractors to keep the wild horses corralled and it doesn’t spend the needed money to expand the program for birth control for the horses instead of the expensive, brutal and inhumane round-ups that have been going on for years.

You can read more on RT Fitch Wild Horse Freedom Federation for contact information and how you can help.