In Ogden, New York, a police officer now adds rescuing an owl to the many animals he has been able to save during his career. According to WHAM, Ogden Police Officer Travis Gray certainly gives a hoot about all life when he responded on Tuesday to a 911 call about an animal in dire need that had been caught in a fishing line along the Erie Canal. 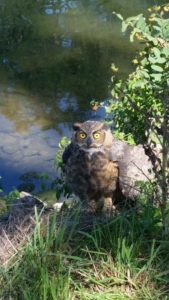 When the officer reached the destination, the Great Horned Owl had been hanging from a tree, dangling over the water, by its wing. Rescuers agreed it appeared someone had cast a fishing line which caught in the tree, and the owl accidentally met up with the line and became trapped. Residents say the owl has lived in the area for years, but being reclusive and nocturnal has rarely been seen.

The entire rescue operation was caught on Officer’s Gray’s body camera, and as soon as the rescuers were able to cut the line loose, the angry bird relaxed, but could not fly away. He is now getting help from the Blackcreek Wildlife Station where he is currently undergoing rehabilitation.

“We are hopeful he will make a full recovery. He is currently receiving laser therapy treatment for his injured wing and is resting,” the organization posted on their Facebook page.

During Officer Gray’s career, he has rescued a turtle, a pigeon, dogs, cats and deer. Known as an animal lover, who could ask for a better example for all our wonderful police officers who risk their lives keeping us safe? (and our wildlife friends too)

Owl Rescued!Today, Officer Travis Gray added "owl" to his list of rescued animals (pigeon, turtle, etc.). He responded to a call of an owl caught and hanging in fishing line. Along with some helpful citizens, Ofc Gray cut the owl loose from the line and turned it over to an animal rehabilitation expert. Here's the video from his body-worn camera…

Posted by Town of Ogden Police Department on Tuesday, September 13, 2016

Outrage sparks U.S. government to say it has no plans to kill 45,000 wild horses...
Scroll to top