In Central Oklahoma a deputy who left his K-9 companion to die inside of his patrol vehicle for 36 hours has been fired, reports Nbc4News. 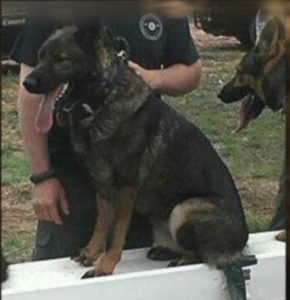 According to the Stephens County Sheriff’s Office, Deputy Matthew Beck forgot about the dog named Bak for days until he was back on duty. The two had been partners for four years previous to the accident.  The Duncan Banner reports Bak was discovered dead in the back of Beck’s car on August 5. The deputy was on his way to court when he smelled the dead dog’s remains. The eight-year-old German shepherd had been with the department for six years.

“The handler has the utmost responsibility to make sure that the dog is well taken care of. A tremendous amount of work goes into the dogs and not only with their dogs but with their handlers. Those two became partners. We will replace Bak and remember him, but we’ll continue,” stated Sheriff Wayne McKinney. “It’s been a sad day around here for all of us. We all like our animals. I’ve got several personally of my own, but these dogs that work day-to-day with some of our deputies are their partners.”

An investigation continues against Deputy Beck to decide if felony animal cruelty charges will be filed.

A memorial service will be held for Bak and his name will be added to a memorial for fallen deputies outside the Stephens County Courthouse.