You are here: Home1 / News2 / Dogs3 / dog abuse4 / Woman shoots and kills her 2 dogs to ‘send them to heaven’
Spread the love
Tweet

In Cheyenne, Wyoming, a woman  faces charges of misdemeanor animal cruelty for shooting her two dogs in the back of her home in order to “send them to heaven,” reports KgabNews. 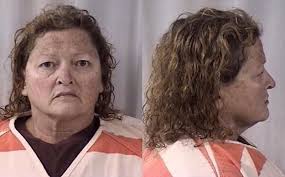 Peggy Jo Wilson, 58, was charged on Friday, for allegedly shooting her two dogs named Gordy and Snickers with a pistol because the dogs were not allowed in the home she was moving into and the dogs had previously been indoor pets. Originally arrested on Wednesday, the Laramie County Sheriff’s Office responded to a report from Wilson’s ex-husband at their residence on Tate Road that his ex-wife had killed their two dogs.

According to police documents, Peggy Jo had been moving back into the home with Patrick Williams (her ex-husband) and the man’s current girlfriend, but the dogs were not allowed in the home. Peggy Jo felt the dogs would feel as if they were being punished if kept in the garage, and decided to shoot and kill them.

If found guilty of all charges, Wilson faces a punishment of up to two years in prison and a $5,000 fine.

Rest in peace Gordy and Snickers.