You are here: Home1 / News2 / animal cruelty3 / Food baited with explosives used by poachers in India to catch bears for...
Spread the love
Tweet 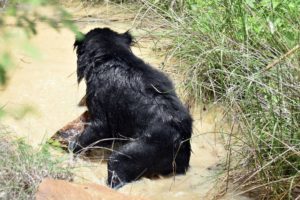 When a report from the Divisional Forest Officer of Ramanagara district informed the Wildlife SOS team of an injured bear lying in a stream near some fields in the region of the Bangalore city of Karnataka, rescuers found the sloth bear writhing in agony as it collapsed while trying desperately to escape: 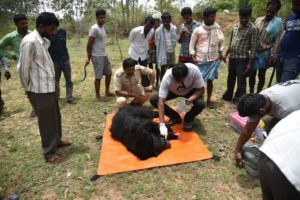 “…the sight that met their eyes was heart wrenching. Bleeding profusely and barely able to move, the bear could have passed off as dead had it not been for its agonized whimpering. It was evident he was in acute distress, so the team immediately tranquilized him and got to work examining the damage.” 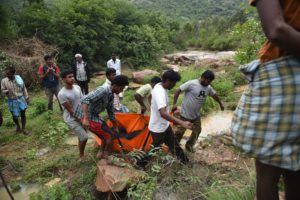 Along with the forestry department, four men from the rescue carried the bear, suffering from multiple fractures in both its lower and upper jaw, to a waiting cage. The injuries were from a country made explosive device hidden inside of food. Poachers use the crude device to kill wild boar, but now the bears have been targeted.

While Karnataka had been home to a large population of sloth bears,  the natural habitat of these animals continue to deteriorate as humans encroach into their environment. Their population is currently threatened because of poaching, illegal trading of bear parts and man-animal conflicts. Sloth bears are categorized under the IUCN list of Vulnerable species. 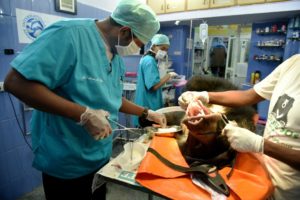 The exploitation and horrific torture of these animals is illegal under the Wildlife Protection Act 1972. If convicted, the poachers could face jail sentences from three to seven years.

Sloth bear parts are still used in Chinese medicines and are considered gourmet foods in parts of Southeast Asia. In addition the sex organs and gall bladders of the bears are used as aphrodisiacs. 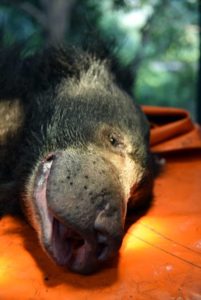 Now dubbed, “Champ” by the Wildlife SOS crew, the sloth underwent five hours of surgery and is currently being fed intravenously. Bone fragments and maggots have been removed, and Champ is slowly recovering and seems “quite friendly for a wild bear.”

To help the organization help Champ, donations can be made by clicking here.

Rescue organization searching for deaf dog who ran away after serious car a... NJ State Trooper rescues poodle from heat stroke after left in hot car
Scroll to top