In Pilesgrove Township, a quick thinking New Jersey State Trooper saved the life of a small French poodle on Saturday who had been left in a car on a very hot afternoon, reports the Facebook page of the New Jersey State Police. 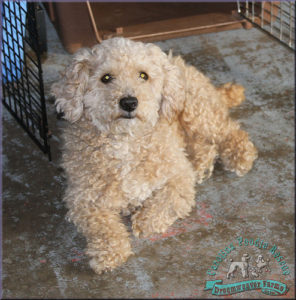 Trooper Frankie Williams had been dispatched to the parking lot of Ranch Hope Thrift Store in Pilesgrove, after a concerned citizen called authorities reporting a dog in distress inside of a Mercedes-Benz with only one window opened less than an inch. When Trooper Williams arrived, he observed the dog lying on its side inside of a crate in obvious distress. Fearing for the dog’s safety, he broke the rear driver’s side window with his expandable baton.

The dog was taken out of the crate, and brought  to a shaded area where Trooper Williams poured water over the pup and gave it water to drink. He was taken to Saint Francis Veterinary Center in Woolwich for further treatment; the dog suffered from extreme heat stroke and had originally been listed in critical condition.

Since then, the pup has been recovering and is reported to be in stable condition. He will remain in the custody of Animal Control pending the outcome of the court’s decision. The dog’s owner, a 43-year-old woman from State College, PA has been charged with animal cruelty.

And not as if we continually remind pet owners to leave their dogs at home, the New Jersey State Troopers hope everyone reads the following:

“We sometimes talk about the dog days of summer in jest here on social media, but today is not one of them. August days in Jersey are typically hot, but they’re even hotter inside a car with rolled up windows. Car temperatures can quickly climb to lethal heights for children, pets, and even adults. But inside of a hot car is where Trooper Frankie Williams found a Toy Poodle suffering from severe heat stoke on Saturday, August 6…”

Save a life and leave your pets home!

Food baited with explosives used by poachers in India to catch bears for pr... Video – Touching last moments between dog and dying woman
Scroll to top