UPDATE: Winston has been found, is safe and will be cared for until his owners can come for him. 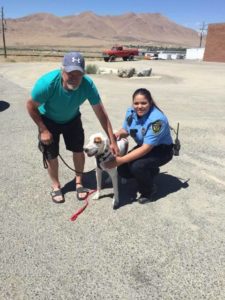 In Winnemucca, Nevada, a one-year-old favorite rescue dog named Winston, on his way to his new home in Oregon from Denver, is lost after a serious car accident, reports Above and Beyond English Setter Rescue. 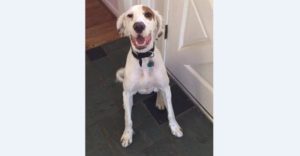 A crash on Route 140, northwest of Winnemuca occurred near mile market 28 on August 7 – halfway between Denio, Nevada, close to the Oregon border and Highways 140 and 95. According to KoloNews, the car flipped over several times and the driver was able to crawl out. The woman is currently in the hospital in intensive care. Winston had been strapped in with his  doggy seat belt, but was nowhere to be found.

Just hours ago on Tuesday morning, the rescue group reported sightings  of the dog, stating the following as an update on their Facebook page:

“POTENTIAL SIGHTING – NEAR QUINN RIVER RANCH BETWEEN MILE MARKERS 28 AND 29 – HE TOOK OFF WHEN SHE STOPPED CAR – HEADED TOWARD HOT SPRING 10:45 EST – 7:45AM Nevada time. Winston update: paw prints were spotted, no blood (a good sign). A reward is being offered and people who know Winston have been sharing information about him to help attract and get him home. Keep thinking positive, so many people are working diligently to bring him home safely!”

The search continues. Winston is described as extremely friendly, weighs 51 pounds and is deaf in both ears. During his last sighting, Winston took off when the car stopped.  If you have information about his whereabouts, please call Heidi at (724) 689-7436. There is a $650 reward offered if he is found. 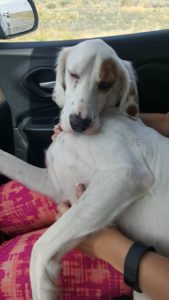 (Photos Above and Beyond English Setter Rescue)