In Maiden, North Carolina, the mother of a little girl and best friend and guardian to her two Weimaraners, considers her dogs lucky to be alive after they were bitten by a copperhead snake in her fenced in backyard, reports WsocTv. 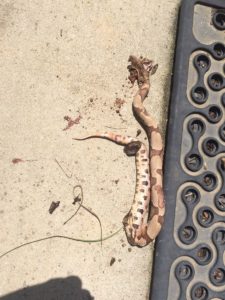 The dogs, Holly and Laya had been in the backyard on Tuesday when Kristel Wittensoldner spotted the dogs foaming, swollen and bleeding.  Both dogs had been bitten on their snouts by a huge snake coiled up in the yard. Immediately she rushed them to the veterinarian’s office where the dogs were treated with anti-venom. According to the veterinarian, Holly and Laya were lucky to have been bitten on their noses as the venom did not penetrate much tissue. 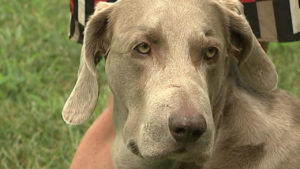 And as soon as Kristel returned home, she grabbed a shovel and made one fatal swipe at the snake telling news reporter Liz Foster,

“[The] snake was coiled and it was big and it was looking right at me. I knew I had one chance to strike it.”

Although copperheads are not generally poisonous to humans, Kristel wants everyone to be warned. Luckily Holly and Laya took the hit as opposed to Kristel’s young daughter. For now on, she will be on the alert for snakes.

Prison for man who used torch to burn dog locked in dog house Puppy mill breeder banned for 15 years after dogs kept in dark and fed moldy...
Scroll to top