Romeo, a Golden Retriever was found alive on Friday after having been buried beneath the rubble of his home in Italy after nine long days, reports AbcNews. 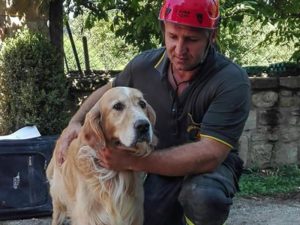 The dog appeared confused at first as he was pulled up through a pile of broken concrete in Amatrice where more than 300 died on August 24 after a 6.4 earthquake struck. Somehow Romeo hung on – firefighters actually heard the dog barking as they were helping the owner retrieve some of his personal belongings in the debris once called his home. Firemen helped Romeo out of the broken concrete and onto the safety of the cleared ground. As his tail wagged, he sniffed around and just seemed to celebrate his good fortune. His family told rescuers they never gave up hope that Romeo survived. Fortunately, they were right!

Photos have captured the moment of Romeo’s rescue as he carefully maneuvered down piles of rubble; and for this miracle pooch – the first time he saw daylight in nearly a week and a half. 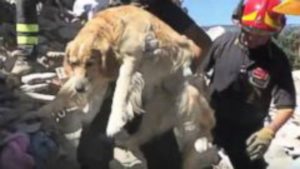 Check out the video of Romeo’s rescue: