Meet Hector; his story is as sad as his face, but the SharPei and Staffordshire Bull terrier has been rescued, and his caretakers are slowly getting the dog used to kindness – an emotion this poor bait dog most likely never knew until this week. 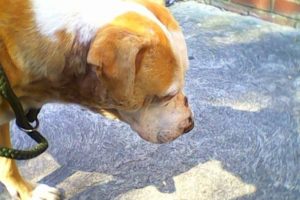 Found in Fengate, Peterborough, England, the League Against Cruel Sports contacted the Ravenswood Pet Rescue asking for help with a dog they had just found wandering the street with multiple injuries wearing a muzzle. It is believed Hector had been a “bait dog” used to teach fighting dogs to be aggressive. And so the dogs in training would not be harmed during their practice fights, Hector’s owners used an electric grinder to file down his teeth. 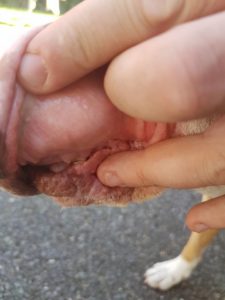 According to the Wisbech Standard, Hector was quite aggressive at first, but he is since calming down, although he avoids all eye contact and is quite timid. Shelley Ridgeon, from the rescue organization stated:

“He was seen running, and they managed to capture him after he collapsed. We’ve managed to get him out of his kennel and he has had a walk, but he is distant and very on guard. He has swelling to the face, cuts all over, his teeth have been filed down and there are injuries to his neck. We don’t know where he has escaped from but he was literally running for his life. Mentally he is scarred.”

Fortunately Hector is making progress. On the rescue’s Facebook page, the tan and white pooch enjoyed his walk and for the first time wagged his tail. And as Shelley sat on the floor, Hector slowly approached and laid his head in her lap. 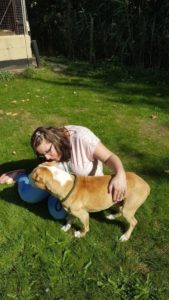 Hector’s rehabilitation is expected to take more than 18-months, but his rescuers are ready and prepared to take it little by little to win over a dog whose life has been full of misery and pain. Ravenswood is looking for an experienced foster family – no children or other dogs to help with Hector.

Anyone who suspects dog fighting is urged to call the police or the League Against Cruel Sports crimewatch at 01483 361 108. If interested in helping Hector, please call 0844 5555 987 or click here.