You are here: Home1 / News2 / Heartwarming3 / Abandoned ‘dead’ dog has left dismal past far behind

The story of Sophie is simultaneously heartbreaking, and joyous. Joyous, because today, this once “dead” dog is healthy and loved…heartbreaking because a short time ago, someone literally threw her emaciated body away and left her for dead.

On Thursday, Sophie’s story of triumph over sorrow was published in the Huffington Post. Today, Sophie is living with Veterinary Technician Elizabeth Mancera – one of the first people to provide Sophie with life-saving care after she was found on November 2, near death, abandoned in a cage in Austin, Texas.

Officers had responded to a call about a dead dog – what began as a sad mission to collect a dead body turned into a life-saving rescue effort when it was revealed that the “dead” dog was still clinging to life. Cruelty officers rushed the ailing dog to the Austin Animal Center. Mancera described the first moment that she set eyes on the frail young dog:

The detectives pulled up and said they had a dog who was barely alive. They handed her almost-lifeless body to me and I laid her on the exam table. She was covered in feces and freezing cold and wet. I talked to her the whole time and even though she couldn’t move her body, she looked up at me with pleading eyes. I kept telling her she would be okay.”

Sophie weighed under 10 pounds when she was first rescued – she was anemic and freezing. Quick veterinary intervention, and round-the-clock care, gave Sophie the boost that she needed to make a life-saving turn around. 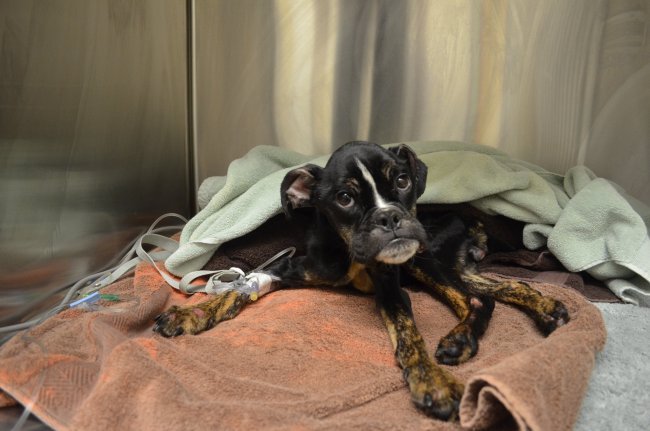 Remember Sophie? She is the sweet pup we took in after she was found in a kennel on the side of the road starving and on the brink of death.Sophie was incredibly thin, anemic and we didn’t know if she would survive.
And will you look at Sophie now! She is up and walking around! She’s also gained four pounds already since the first day she was found

😍She still needs a lot of time to gain weight and heal so she needs all the loving vibes she can get! It will be a while before she can be adopted but in the mean time, give Sophie some encouraging words so her foster mom can read them to her before bed tonight

Sophie was able to recuperate in Mancera’s home – Sophie started to put on weight, and thrive – relishing in a good life, surrounded by unconditional love and good care. Around Thanksgiving, Mancera realized that Sophie had become part of her family, and that she would not be simply her “foster” anymore. According to the Huffington Post, last week, the adoption was made official.

The pain of Sophie’s past is a distant memory – her future will be full of love, and joy.