In Mesa, Arizona, a Maricopa County Sheriff’s Office K-9 was attacked by three dogs during a standoff as a SWAT team yelled for a man suspected of shooting at his girlfriend to surrender, reports CbsNews. 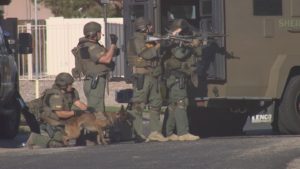 The suspect, Richard Winn was ordered to surrender, and as authorities waited, three large dogs ran out and attacked the leashed K-9 named Marko. An officer shot and killed one of the attacking dogs. Marko, however seemed unfazed and even though he was bloody and clearly injured, the dog continued to concentrate on his handler’s commands.

“He (Marko) wasn’t distracted, even after being attacked by another dog,” stated the owner of Delta Canina Services, Bob Solimini, who has trained dogs for police work nationwide.

It took two hours before Winn finally surrendered as officers used tear gas and a rubber bullet to capture the man. 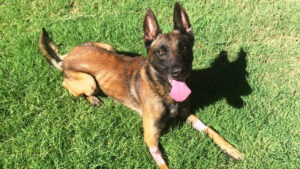 According to the Facebook page for the Maricopa County Sheriff’s Office, Marko is recovering and is expected to be fine. No updates have been provided as to the suspect’s two surviving dogs.

Check out the chaos and risk the officers, as well as Marko, experienced during this dangerous encounter.