One-year-old Kato had been picked up by Animal Control  and brought to a rural North Carolina animal shelter. The dog had been hit by a car, and no one ever bothered to stop; Kato was left to languish in pain on the side of the road. 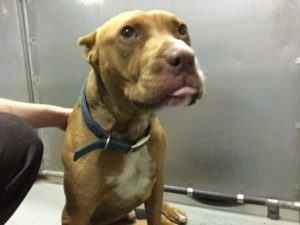 And there began the near tragic dilemma for a young, injured pit bull in a high kill shelter with a badly broken leg. Although there were no x-rays taken of Kato’s rear leg, it was determined by the shelter, if a rescue organization couldn’t be arranged, Kato would be euthanized. 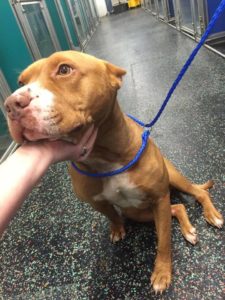 “A one year old pit bull with severe injuries at a high kill shelter has little chance at survival as we all know, sadly. He quickly became a staff and volunteer favorite, and everyone was begging for his life. We agreed to help Kato as we believed he deserved a chance,” Jackie O’Sullivan wrote to their followers on the Rescue Dogs Rock NYC’s Facebook page.

And the magic began. Kato was transported to New York City, and for the past week, he has been examined and evaluated by an orthopedic surgeon. The dog’s thigh is extremely swollen beginning at his hip, and he will not put any pressure on that leg. According to the surgeon, the accident broke his femur (thighbone) affecting the neck of the femoral bone. A “locking implant” will need to be inserted in a very complicated surgery requiring two surgeons in attendance. 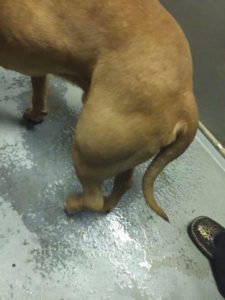 “The surgery is scheduled for tomorrow (Thursday) at 10:15 a.m,” Jackie stated. “The surgery will cost approximately $4000. He deserves every chance to live a normal happy life. Everyone that meets him says he’s so special… one in a million.”

Help Kato have another chance at life. Isn’t that what counts? Click here to donate to Rescue Dogs Rock NYC. Donations can also be made via Paypal: Donate@rescuedogsrocknyc.org.