A 12-year-old hunter from Cove, Utah who has been posting photos of herself on Facebook with dead exotic animals she recently hunted and killed, has created worldwide outrage as well as receiving death threats, reports the SF Gate. 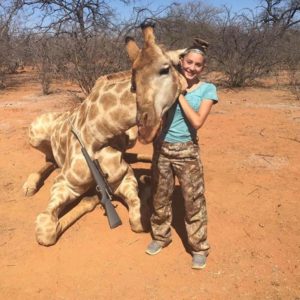 On a recent African safari, Aryanna  Gourdin, accompanied by her father Eli Gourdin, posted images on her Facebook page, entitled Braids and Bows, which shows  the preteen proudly smiling as she stands next to a dead giraffe holding the animal’s head up. Also included in her recent “kills” were photos of a dead zebra, an antelope, a wildebeest and a bear. She uses both a rifle or a crossbow when hunting and has been taking hunting trips for the last five years. 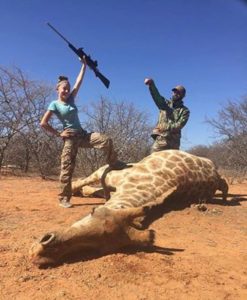 Her hunting repertoire also includs North American animals including deer and bears. One photo showed a photo of a dead bear she shot in Utah.

Since posting the photos, Aryanna has been receiving angry comments and death threats. Comments similar to:

“Thanks for reminding me that stupid people still exist… Please consider using that thing in your head next time, that what we call a Brain,” one person posted under the photo of the child crouching over a dead zebra.

“Another piece of s***. Everybody made her famous.”

And one more among thousands and thousands reflecting similar sentiments:

“Not every single human, only small brains I think. It is exciting to see a small girl having the balls to post all this and laugh about all this ****storm. But in fact of all, this picture is quiet terrible. Never put a foot on the game young lady. This is respectless to the animal…” 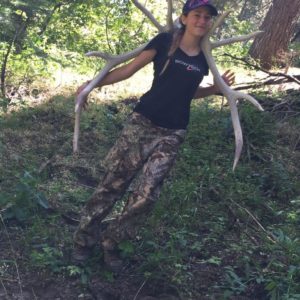 Those who are defending the girl state she is helping with conservation efforts; one source cited the giraffe had been a danger, and it had been eating up valuable resources other giraffes needed for survival. According to Good Morning America, Gourdin’s father stated the giraffe’s meat had been donated to a local orphanage, although there were no photos of the “800” orphans – either being fed or starving. As to the photo of Aryanna standing with her foot on the dead animal she stated:

“It’s something I cherish and enjoy and I want other people to see what I experienced.”

Does the young huntress remind one of the controversy associated with Walter Palmer, the dentist who killed Cecil the lion in July 2015? Ah, another game hunter in the making claiming animal conservation. Why not ask the giraffe, zebra or other animals you killed – all mixed up in the rhetoric ” if it was good for the animals”?