In a very sad situation, a homeless woman believed to be a veteran and suffering from mental illness, was found this week in Bronx, New York living in her Mercedes SUV with 22 dogs, reports NbcNewYork. 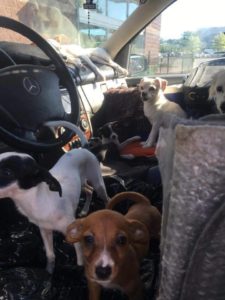 A German shepherd crated in the rear of the vehicle lived with 21 puppies of various ages and breeds in the heat and humidity in what has been described by authorities as deplorable conditions. 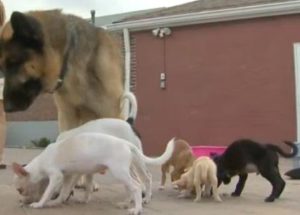 “She had the German shepherd kind of crated really to the back and the rest of them were just loose all over the place,” stated Regina Galente of Adore-a-Bullie Paws and Claws.

The puppies ranged in ages – some

extremely tiny and frail while others hid in the corner of the vehicle too afraid to venture out. Bobbie and the Strays, a Long Island rescue has agree to take in half of the dogs. Even police officers came to the aid of the pups.

The German shepherd named Bruno watched over all of the puppies just like a doting dad. According to the Adore-a Bullie Paws and Claws, he is approximately five years old – great with children and other dogs and available for adoption. 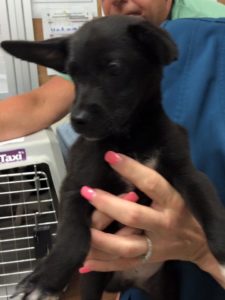 For more information about adopting this great dog, click here. To help with these dogs, donations can be made here. 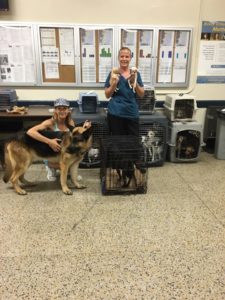 Bobbi and the Strays, a rescue in Freeport has volunteered to help 11 of the dogs. All of the dogs needs veterinary attention, baths and socialization. To donate, foster or adopt, please follow this link.

All of the puppies are expected to survive. The woman has been charged with animal neglect.

(Photos courtesy of Adore-A-Bullie and Bobbie and the Strays)