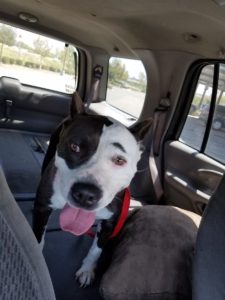 A series of fortunate events led to the adoption of a dog who was surrendered by her family and left sitting on death row at the Riverside County Animal Control in California. The dog, whose name was previously unknown, was spotted at animal control by an animal advocate who was dismayed to learn that she had been surrendered.

The advocate emailed the Pet Rescue Report with a request for help – the email read, “This beautiful dog has the sweetest personality and has the best markings you’ve ever seen, literally a black eyebrow over her left eye! I had to go up to meet her when I saw her owner walking her around outside the facility, not even occurring to me that she was soon to be dumped because she was so gentle, really well behaved, she came right up to me, sat down and waited for me to pet her. And she was very well taken care of, had on a brand new pink harness and leash.”

The plea for help was answered and the death-row dog was featured in a Pet Rescue Report article. Thankfully, the article made its way to a woman named Angela, who decided that she had to take action. The new adopter, emailed Pet Rescue Report about her newly adopted dog, named Chola, “She is simply an amazing girl!! When being introduced to people she will sit and put her paw out to shake hands. She is great with kids , dogs and cats!! We still can’t even believe anyone would want to give her up.”

The adoption of Chola took place just one day after Angela’s former dog passed away from cancer…though Angela was heartbroken, she knew that she had to take action after running across Chola’s information on social media. 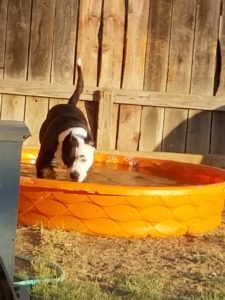 She commented on her family’s new companion,  “honestly she has been nothing but amazing. She has quickly  accepted her new brothers Apollo (a pitty mix) and Civic ( a standard poodle) and her new human brother Axel.”

Enjoy your new life Chola – many thanks to the person who originally reached out with the request for help, and to Angela and her family for taking this beautiful dog into their home.

Dog, too weak to walk, discovered in Ohio 22 dogs discovered living in homeless veteran’s SUV in Bronx
Scroll to top