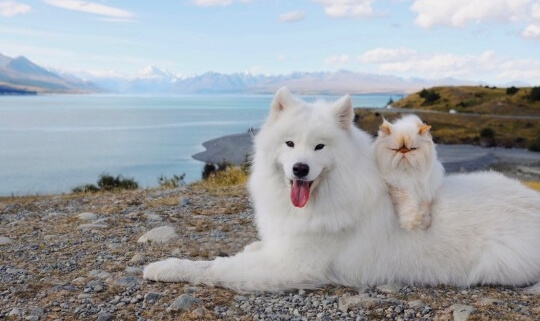 Meet Romeo – a rather “sourpuss” looking fluffy feline and his best friend – an also fluffy, white Samoyed dog named Casper. The two have taken their adventures to Instagram @CASPERANDROMEO, and their more than 50,000 followers are loving it.

The two belong to Rinsa Li from Christchurch, New Zealand. Perhaps it looks like two-year-old Romeo is not having fun, it’s not true at all; it’s just his face! His human mom assures us Romeo is the sweetest cat ever and loves to be held and cuddled.

And so the relationship between Casper and Romeo began nearly two years ago, when Rinsa decided she wanted a cat, but wasn’t sure how six-year-old Casper would feel about it. After all, Casper did seem to enjoy the company of a friend’s cat, so why not give it a chance?

“The pair were introduced slowly and with intention. First, they were separated for a week and introduced to each other only by smell. Romeo was very curious but nervous about Casper, who seemed eager to bridge the gap to a full-fledged friendship right away. Over time, Romeo’s nerves dissipated. and the two became joined at the hip.

The two kept their distance for awhile, but within a few weeks they became inseparable. According to the Daily Mail, the two spend hours together exploring the New Zealand countryside with Rinsa who happens to be a professional photographer. Followers on Instagram just love the photos and often credit the cat and dog – seemingly in so many instances not always a perfect match, these two just loving each other and delighting in each other’s company.

At home, the two are often seen cuddled up together sleeping – hey dogs and cats need their rest.

Dog recovering after someone beat him and dumped him with other deceased animals...
Scroll to top