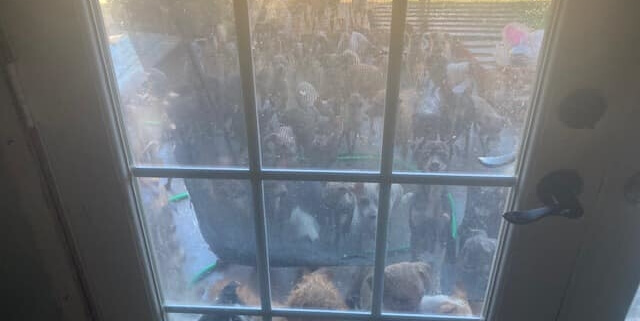 Last week, animal control officers rescued 111 dogs in Mesquite, Texas. The staggering number of dogs were all at one residence, in conditions described as “deplorable,” reports DFW CBS News.

“We were made aware of the situation in which a residence may have had a large number of dogs. Our Animal Services Officers responded and found 111 small breed dogs. The property owner surrendered the animals to the City, and we transported them to our shelter for impoundment and intake vaccines. We worked with our rescue partners and by the end of the day, all the dogs left the shelter to begin their new journey.”

Mesquite Animal Pawtners commended those involved for rescuing the dogs:

HUGE shoutout to the Mesquite Shelter today and to each rescue that stepped up!!!
Today the animal officers visited a house to pick up 20 dogs. They left with 111. Yes, the shelter took in 111 dogs from one house today.
AND every animal was given a voice!!!! A chance!!!
We appreciate the shelter for their efforts today, the networkers who were able to help get the word out, and the rescues who made themselves available to show up today. Shelter staff was calm, cool, and on fire.
Every animal was saved!!! Yes….you read that right!!! Every dog from that house was saved today. Thank you rescues!!!!

ALL of these rescues are going to need donations, fosters and supplies. PLEASE consider donating to them. Apollo Support & Rescue for Abandoned Dogs saved 29 dogs – Adding their link below Dallas Dog – Rescue.Rehab.Reform saved 12 dogs Cody’s Friends Rescue saved 12 as well Paw Support rescue saved 2 Dallas Pets Alive Fuzzy Texan Animal RescueWhite Rock and a few others helped as well I’m not sure how many each took.

Suffering senior dog so grateful to be alive finally rescued after thousands...

Chained to a tree 24/7 in Texas sun and heat, pup’s only relief was to...
Scroll to top