You are here: Home1 / News2 / Dogs3 / dog news4 / Dying dog, abandoned in the cold, being lavished in love and attention 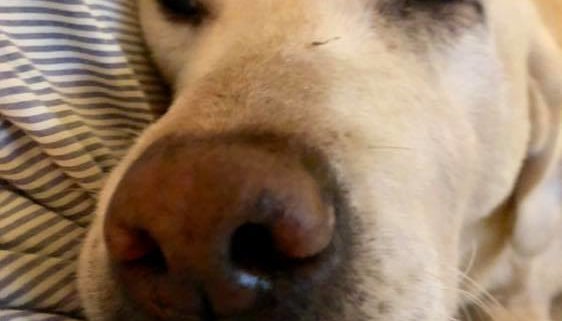 A dying dog, who was abandoned in the freezing cold outside of an Illinois animal control agency in November, is being lavished with love and attention. The yellow Labrador retriever, dubbed Loretta, was emaciated and had a massive tumor on her abdomen – someone had clearly denied the sweet-natured dog the attention she needed for a very, very long time. 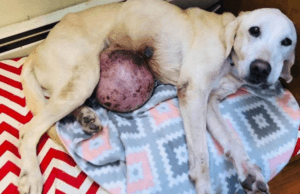 Loretta has since been taken under the wing of Partners 4 Pets, and had the huge tumor surgically removed. Though she is much more comfortable, her time is limited because she has cancer throughout her body. On November 28, the rescue group shared the bad news with Facebook followers:

It is with a broken heart that we have to report Loretta’s cancer has spread to several areas of her body. Unfortunately due to Loretta’s body condition, and being heart-worm positive she is not a candidate for chemo or other cancer treatments. Sometimes rescue doesn’t have the ending we had hoped for. But, we have to take into perspective what Loretta’s life was like just last week. She was left by her owners, tied outside of animal control in the cold, with an enormous tumor and horribly emaciated.

She will be creating a bucket list and going on lots of adventures. One thing is for sure, she will know that her life meant something to someone, to Partners for Pets, and all of you.

Loretta’s prognosis may be dim, but her final days are not. On December 13, the group wrote:

We want to let everyone know that Loretta is doing great. She is so happy to be rid of that tumor. We know she only has a couple of months, but it was worth the trouble to take it off. Loretta is running around and enjoying each day to the fullest. Here are some pictures from her last cheeseburger run. That’s her “can I have a cheeseburger” face. Yes Loretta, you can have as many as you want ❤️ #lovingloretta

Loretta has also been treated to Christmas gifts and carolers, toys, treats and even a spa day – suffice to say, she knows that she is loved, and that she means something. In fact, each and every day is a bucket list in and of itself…she is spoiled and adored, as it should be.

In mid-January, in the midst of frigid winter conditions, her rescuers wrote:

We are pretty sure Loretta is getting a bucket list item checked off this weekend…she doesn’t have to be outside in this kind of weather! She gets a warm bed, plenty of food, treats and a lot of love. The only time spent outside is to play and go potty. That’s it! #lovingloretta

Enjoy it all sweet girl!