A man and his stuffed dead dog seem to be inseparable. Mitch Byers, from Portland, Oregon, uses Instagram to document his activities with the cute Jack Russell terrier – but for the record Byers’ dog is dead. Phoebe died in 2013, however she “still loves to have her tummy tickled, be photographed and go on trips.” 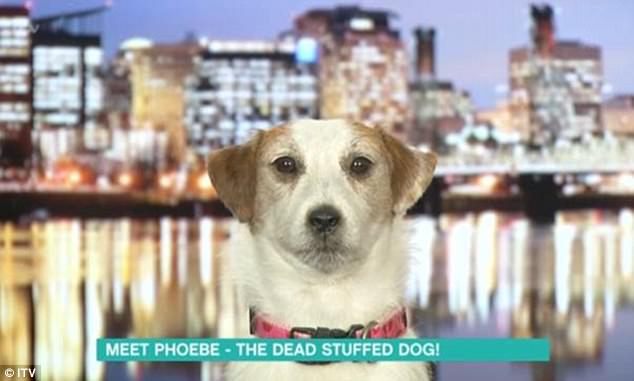 You’re shaking your head now, I can tell, but this is too bizarre to even make up. On the ITV’s This Morning show with the husband and wife team Eamonn Holmes and Ruth Langsford, Mitch Byers sat down for an interview; and yes Phoebe was right by his side.

With details reported by Digital Spy, the looming question why anyone would want to stuff a dead dog, Mitch explained his mother had been the mastermind of this entire ordeal. She had loved the dog very much, and the taxidemied version of Phoebe had been done in secret. It wasn’t until Mitch’s father found the receipt that the dog came out from wherever she had been hidden. Now it’s Mitch who has taken to social media and created a new dimension in pet love.

The photo that sparked the attention was of Phoebe in the passenger seat of Mitch’s car. After the photo went viral, the animal lover set up the Instagram account ‘My Dead Dog and Me’, which has 1,700 followers where he documents all his activities with the dead pooch.

And now comes a kind of creepy part, but please just read on because it’s not meant to offend, but more to shake one’s head in perhaps an alternate thought. The Instagram photos show how Phoebe goes on vacations and even meets other dogs – live ones!

“[My friends- other dogs] were very wary of her first, as they expect her to jump and play, but they’re really curious,” he added.

Mitch did say his parents may get another dog in a few years, but for now Phoebe is the family pet – stuffed or not.

Twitter erupted with some pretty odd responses – calling Mitch “barking mad.” As it is so very true that we do love our dogs and our hearts break in tiny pieces when our faithful four-legged pals leave us much too soon, but is taxidermy the answer? Weigh in with your thoughts, and this writer always appreciates some of the “laugh out loud” witticisms many of our readers contribute with odd news.